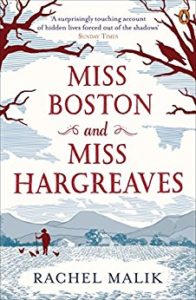 Welcome to my stop on the blog tour for Miss Boston and Miss Hargreaves by Rachel Malik. Thank you to Rachel for asking me to take part and to Hannah Ludbrook at Penguin Random House for the review copy.

I so wanted to have finished the book in time for this post but I haven’t quite made it, so my review will come in a day or two. In the meantime, I have a great guest post from Rachel about trials in fiction. First of all though, let’s see what the book is about:

When Rene Hargreaves is billeted to Starlight Farm as a Land Girl, far from the city where she grew up, she finds farmer Elsie Boston and her country ways strange at first. Yet over the days and months Rene and Elsie come to understand and depend on each other. Soon they can no longer imagine a life apart.

But a visitor from Rene’s past threatens the life they have built together, a life that has always kept others at a careful distance. Soon they are involved in a war of their own that endangers everything and will finally expose them to the nation’s press and the full force of the law.

If you like the sound of it then it’s available now in ebook and from 1st February in paperback.

Trials in fiction…. by Rachel Malik

There is no shortage of great trial scenes in novels – perhaps the most famous of all takes place in Harper Lee’s To Kill a Mockingbird. Trials create rich opportunities for conflicts and clashes of personality and interest. Readers and characters are presented with competing versions of the ‘truth’ and one must win. There are sudden reversals of fortune and, like the moment in the wedding ceremony when the congregation is asked whether anyone know any reason why the couple should not be joined together … (think Jane Eyre), there is always the possibility of a sudden, dramatic and improper interruption to official legal process. In my novel, Miss Boston and Miss Hargreaves one of my two heroines, Rene Hargreaves is charged with murder and tried in Winchester in 1965.  Her long-term companion Elsie Boston appears as a witness for the defence – the trial is the central crisis in the novel – though I’m not going to give away many details here!

I have long been fascinated by courtroom drama and there are two I find particularly compelling. The first is the inquest into Rebecca’s death near the end of Daphne Du Maurier’s Rebecca. The remains of Rebecca’s body have been found when a wrecked boat is disturbed by a storm and Maxim has to explain how he misidentified his wife’s body some years before. The inquest scene in Rebecca is tense because the reader knows what the inquest result should be. Maxim has just told his wife, the second Mrs De Winter, that he murdered Rebecca and why. But we, like his new wife, want him to get away with murder. Tensions rise in the court-room. The only plausible explanation of the circumstances of Rebecca’s death seem to be suicide. But all the witnesses agree that it can’t be: Rebecca, beautiful, talented and brilliant had everything to live for. It is also unthinkable that she would have made a basic error with her boat as she was an excellent sailor. The stakes are even higher because there is at least one characters who is out to destroy Maxim. At the height of it, the Coroner drops a bombshell in the form of a question to Maxim:

‘Were relations between you and the late Mrs De Winter perfectly happy?’

How will he answer? Will he be able to lie? Does he want to? His wife starts to feel dizzy, ill, she is terrified of what is coming.  And then, miraculously it seems, fate intervenes:

‘..out of the queer mist around me, Maxim’s voice clear and strong. “Will someone take my wife outside? She is going to faint.”’

The other scene takes place in E. M. Forster’s novel, A Passage to India, set in colonial India in the early 20th century, a young woman, Adela Quested, has accused a young Indian doctor, Dr Aziz, of some kind of sexual assault (the details always remain unclear) in the mysterious Marabar Caves. The courtroom scene is quite short, but very concisely, it dramatises all kinds of hostility and misunderstanding. The English, though they personally dislike Adela, are determined that she should be right: she is an Englishwoman after all. They are equally determined that Aziz be wrong because he is an Indian and they ‘know’ all Indian men are dishonest and uncontrollably lustful – particularly where white women are concerned. Forster uses snippets of questions and answers from witnesses and lawyers and the physical details of the courtroom to capture the tensions but we see the most from Adela’s point of view. When she is questioned, taken slowly through the events of the day, she begins to feel uncertain about what happened. An Indian crowd begin to chant and Indianise the name of Adela’s friend Mrs Moore who is also a friend of Aziz, the court is transformed and Adela withdraws her charge, realising she has made a mistake. It’s a difficult moment in the novel: we want Aziz to be freed but we don’t want Adela to be humiliated. There is never a fully satisfactory explanation of what makes her bring the charge.

In Miss Boston and Miss Hargreaves the trial verdict is, of course, crucial but equally or perhaps more important is how the whole trial process impacts on my two main characters: Rene and Elsie.  They have to look at themselves and each other in different and difficult ways. The trial also takes place in the middle of a dramatic flood. The city is transformed, the court itself becomes an outpost and there are all manner of ways in which any of the characters might slip up…. Rachel Malik was born in London in 1965 of mixed English and Pakistani parentage. She studied English at Cambridge and Linguistics at Strathclyde. For many years, Rachel taught English Literature at Middlesex University. Miss Boston and Miss Hargreaves is her first novel.