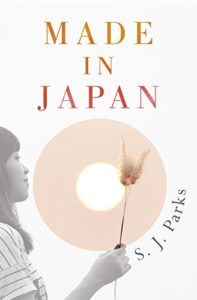 #blogtour – Made in Japan by S.J. Parks @S_JPARKS @Bookollective #extract

Welcome to my stop on the tour for Made in Japan by S.J. Parks. Thank you to Bookollective for asking me to take part. I have an extract to share with you but first here’s what the book is about:

A young girl traces her mother’s steps all the way from London to Japan to search for the father she never knew.

Hana arrives in Tokyo with only two words in her mind: The Teahouse. She’s a long way from home in East London and still fresh from the loss of her mother. But her grief has sent her across to the other side of the world to find out who she is, and for Hana that means finding the Japanese man she has never met, her father with only these two words as clues.

Made in Japan is a beautifully woven story of a mother and daughter who, decades apart, tread the same streets of glittering Tokyo looking for that something that might complete them.

Made in Japan is available now in ebook and paperback.

Naomi had been given the task of reading the translator’s proofs for a publication covering a retrospective of Mochizuki’s works. It did not come naturally to her. There were compensations in getting to know what he stood for and believed in, and, in reading his words, she came closer to falling under his influence. He had been absent that morning and she asked around after him. That day he had suggested they would have an office picnic on the beach but he had not appeared all morning.
Saito-san was keen to maintain her reputation as the ears of the office and came over with the feigned purpose of borrowing a highlighter to find out what Naomi was asking of the others.
‘Is Mochizuki in?’ Naomi asked again.
‘Probably with Ukai. The only man he answers to,’ Saito-san told Naomi flatly, and she scurried off as if she had already said too much. She was keen not to be drawn into further revelations.
Naomi had heard the name but knew nothing of the man.
She turned three more pages of copy before she found, tucked between the loose leaves, a portion of thinly lined file paper and on it a note, hastily written in biro. Someone had drawn lashes round the vacant spaces of the punched holes in the cheap grey paper. The first few lines were in in Japanese kanji and below was presumably a translation; the postscript read: Bashoˉ, seventeenth century.

Come, come with me. Indulge my friendship, Sleeping buttery.
Kobe was engrossed in his comic book, so she ruled him out as the perpetrator of a prank. Nobody, it seemed, was looking for her reaction to the note. So she took it to be an ode to the season from Mochizuki because he had been at pains to introduce her to the poet Bashoˉ.
Iwata was busy making runs in the jeep to deliver the larger items and the chairs to the beach, and had concluded his trips by ten. A delivery van arrived with the food and Saito-san spend a good part of the rest of morning in the kitchenette. Naomi found her with the furoshiki, wrapping cloths that had been bought for the purpose, wrapping the picnic bento boxes with large ties for handles.
‘You need a hand?’
Saito-san told her that Mochizuki had rung in and would be late for the picnic but would join everyone later on the beach.
So she would see him today, she thought. Iwata looked pinched and resentful.
The sea was so far out across the volcanic sands that the line of water could have been a heat haze. Naomi stood on the low sea wall with her back to Mount Fuji looking way out across the volcanic black beach to the Pacific Ocean. It was difficult to believe any tidal force could cover the distance and rise like Hiroshige’s blue wave in the woodblock print and threaten the town.
Even here, on the margins of the sea, humidity clung to the beach party – to their clothes and their hair – adding to their heavy expectancy. Mochizuki had still to arrive and it wasn’t until he did so that Saito-san would start the picnic. There was a mutual assumption that Naomi would only work in the office for a short time and so their efforts to assimilate her were half- hearted at best. Outside the job of work they opened broken conversations with her but, without a common currency, floundered beyond any subject, other than what the bento boxes would contain.
It seemed to Naomi like a long time before Mochizuki strode over the sea wall towards them and, as with a new breeze, their spirits lifted. Frankly, everyone was relieved to see him, not least since the picnic was his idea.
He marched straight over to Naomi and sat beside her. Saito-san handed the bento boxes round and he ate like a prince among his tribe. No one was in any doubt that Naomi was his sometime-honoured guest. She fell on the plum-blossom carrots. Observing this, Mochizuki loaded his own share onto her plate.
Iwata, she could see, did not approve of the additions to her picnic.
‘I was once given a necklace of carrots,’ she told Mochizuki. ‘Unpeeled with their tops intact. There were nine, laced on blue nylon string, lying in a box wrapped in beautiful paper. A nine-carrot necklace, like the gold.’
He laughed appreciatively.
She felt him touch the loose hair across her back.
Quietly he asked her, ‘You get my poem?’, his warm breath close to her ear.
She blushed at his intimacy, letting loose the gingered chicken from her chopsticks.
He took a virtual step back, aware that he had frightened her. ‘Bashoˉ, our great poet of nature,’ he said loudly. ‘I like him more than you like bento lunch.’

He got up to leave her, casting a suggestion behind him. ‘You’ll come and give me a hand at the publishers in Nagoya? I have to travel to Gifu. You’ll come?’ And before she had a chance to answer he left her to think about it. ‘I must attend to my staffs.’
He ran off to retrieve a baseball glove from the basket, calling in Iwata’s direction to grab the bat, ‘Oi Chinko.’ He called him playfully.
Chinko?’ Hana queried, as Saito-san came over to provide more tea. She giggled behind her white lace-trimmed handkerchief. She pointed between her legs and then looked towards Iwata’s crotch. She walked off with the flask laughing. Out on the sands the men ran to the bases they had laid out from their low-slung beach stools. Naomi dozed as Mochizuki’s infectious laughter crossed the sand. S.J Parks, a literature graduate, has lived and worked in Japan. She has a writing MA from University of London and now resides in England with her family. Made in Japan is her first novel.