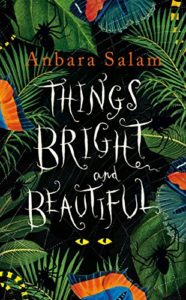 I’m very pleased to be posting today as part of the blog tour for Things Bright and Beautiful by Anbara Salam. I have an extract from the end of chapter 1 to share with you today. I’d like to thank Cat Mitchell from Penguin Random House for asking me to take part in the tour and for sending me a review copy of the book.

Things Bright and Beautiful is available in ebook and hardback.

While Max spent time on walkabouts with Bule, or in church with Aru, Bea found it tricky to get to know the other people in the village. Each day, she strolled through Bambayot, hoping to strike up a conversation with one of the other women. But the women weren’t in the village in the middle of the day; they were farming in the gardens ‘on top’. There were often men congregating by a fallen tree near the nakamal at the south of the village, chewing tobacco or sharpening their bushknives. But Bea was far too nervous to approach them. She was not used to talking to tall, half-naked black men wielding machetes. She wasn’t even sure if it was ‘allowed’, since there were so many tabus around what women were and weren’t supposed to do.

She wasn’t supposed to go walking around by herself. She wasn’t to show any skin above her elbows or knees. Even while bathing, she had to swim fully clothed, in her island dress, or in a pair of Max’s long shorts. She wasn’t allowed to go out in a dugout canoe. It was tabu for women to fish. She shouldn’t make too much eye contact with men, in case she seemed indecent. She wasn’t to wear her hair loose. She mustn’t dry her clothes outside, especially any underclothes. She wasn’t to point directly at anything, because it was unlucky. It was also unlucky for women to walk on the path to the nakamal. She wasn’t supposed to run anywhere. And on Sundays, it was considered ill-mannered to do anything that might constitute work  ‒  no mending clothes on the front porch. It was like being a pilgrim. It made Bea feel a little wild. All she wished to do was leap from her house on a Sunday morning, wearing only her underclothes with her hair shockingly loose, and run straight down the coast into a dugout and start fishing.

For the first couple of weeks, Bea’s main companion was an ugly little stray dog that had decided to follow her around. ‘New Dog’ was a scrawny piebald Jack Russell mutt with an overexcitable temperament. On the afternoon of their arrival, it had accosted her from the grass around Mission House, bursting out of the underbrush, yelping, whinnying and trying to leap up on to Bea’s clothes. Othniel had dropped the half of Max’s book trunk he was carrying up from the coast, and rushed over to her rescue. He kicked the animal in the snout, yelling, ‘Kranki dog!’

The dog whined and slunk off behind the house, looking over its shoulder with its tail between its legs. Its flank was crawling with hopping fleas, its nipples were distended and swollen. Apparently, the beast craved attention, and any new arrival from another village would cause a mania of hysterical joy as the dog cavorted and frolicked, licking and sniffing. There had been so many attempts to catch the animal that it was considered basically demonic. Othniel explained he had tried to snare it in a net. Bea asked what he would do when he caught it, and he had smiled, miming eating.

‘Kakae,’ he said. Bea wasn’t sure if he was teasing her or not.

Bea found that whenever she left her house, it was only a matter of minutes until the dog followed her, flattening its ginger ears against its head, trotting territorially around the porch while Bea scrubbed clothes in the bucket.

It even, to Bea’s mortification, followed her into church. After trying to casually hustle the animal out of the building with her Bible, she had to relinquish herself to its company. It would shimmy underneath her pew, contenting itself with breathing heavily up into the folds of her skirt, attracting flies with its repellent stink. Occasionally it crawled out during the sermon to stretch itself, yawning casually before investigating the other members of the church, who were only too happy to release old-fashioned Christian vengeance on the beast by beating it with their hymn books and smacking it towards the doors, but with no luck. It let out strangled howls of annoyance and squirmed back under Bea’s pew. But as her only friend on the island, Bea didn’t feel she was in a position to be picky Anbara Salam is half-Palestinian and half-Scottish, and grew up in London. She has a PhD in Theology, specialising in apocalyptic death cults, and is now a research associate at the University of Oxford. She spent six months living on a small South Pacific island, and her experiences there served as the inspiration for this debut novel.