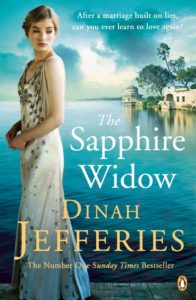 Welcome to my stop on the blog tour for The Sapphire Widow by Dinah Jefferies. I’d like to thank Georgia Taylor from Penguin for the place on the tour and the review copy. Unfortunately, I’ve been unable to fit in a read of it in time for the tour but I do have an extract from the prologue to share with you today.

Ceylon, 1935. Louisa Reeve, the daughter of a successful British gem trader, and her husband Elliot, a charming, thrill-seeking businessman, seem like the couple who have it all. Except what they long for more than anything: a child.

While Louisa struggles with miscarriages, Elliot is increasingly absent, spending much of his time at a nearby cinnamon plantation, overlooking the Indian ocean. After his sudden death, Louisa is left alone to solve the mystery he left behind. Revisiting the plantation at Cinnamon Hills, she finds herself unexpectedly drawn towards the owner Leo, a rugged outdoors man with a chequered past. The plantation casts a spell, but all is not as it seems. And when Elliot’s shocking betrayal is revealed, Louisa has only Leo to turn to…

You can purchase The Sapphire Widow in ebook and paperback now.

His slight build makes it difficult to tell his age, but sitting under the hanging branches of the banyan tree he looks lonely and, as sunlight filters through the glossy leaves, it dances on his thin limbs. This boy, more wood sprite than child of flesh and blood, is the kind of child a mother longs to wrap her arms around. He selects a pebble and, with a furrowed brow, concentrates, then throws it to see how far it will go. Satisfied it’s flown further than the one before, he clambers to his feet and walks around the little rhododendron- enclosed clearing, scuffing his sandals in the twigs and leaves that crackle and splinter beneath him.

He listens to owls ruffling their feathers and shifting in the tree, watches a striped squirrel race up a tree trunk, and then he sniffs the air – citronella, burnt earth, the aroma of cinnamon, and a tang of salty ocean he can almost taste. He picks a pale apricot blossom and buries his nose in its soft, fruity fragrance. This one is for his mother.

He watches a scarlet basker flitting from one leaf to another and wishes he had brought his book of insects with him. He’s never seen this one before except in the book, along with other dragonflies, damselflies and butterflies. He knows there are thousands of them in Ceylon – this place his mother calls a pearl.

As a fresh breeze blows he feels it on his arms and his skin tingles. It’s the best place in the world, this glittering sun- sparkled forest, and he eagerly awaits a walk with his mother, in the evening when it’s cooler. She finds the heat of the day tiresome, but he knows all the shady places and there’s always somewhere cool to hide. But then a change comes over him and a trace of sadness darkens his face. Although he’s content playing alone, something in him longs for more, and he shivers from an uncomfortable feeling of guilt.

He has climbed almost to the top of the hill now, his favourite wide-open place. Here he can see for miles and if he half closes his eyes he can almost feel the ocean. He imagines the cool waves breaking over his burning skin; sees himself running on the beach as fast as he can with the wind blowing in his too-long hair; pictures the fishermen in the early evening before the sky turns pink and the sea turns lilac.

He’s startled by a rustle coming from the trees and stands still to listen. It’s probably a toque monkey, he thinks, or one of the langurs with the very long tails. You mustn’t try to befriend or feed toque macaques, his mother says. If you feed them they think you are subordinate. It means they think you are lower than they are. Sub-or- din-ate. Subordinate would be bad. Nobody wants to be less important, do they? Dinah was born in Malaya in 1948 and moved to England at the age of nine. In 1985, the sudden death of her fourteen year old son changed the course of her life, and deeply influenced her writing. Dinah drew on that experience, and on her own childhood spent in Malaya during the 1950s to write her debut novel, The Separation.

Now living in Gloucestershire with her husband and their Norfolk terrier, she spends her days writing, with time off with her grandchildren.