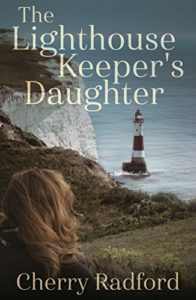 Welcome to my stop on the blog tour for The Lighthouse Keeper’s Daughter by Cherry Radford. This book sounds right up my street as I find books about lighthouses and diaries fascinating. I’d like to thank Kelly Lacey from Love Books Group for the place on the tour and for providing an e-copy of the book.

There’s someone out there, and an unforeseen, irresistible connection…

After the break-up of her marriage, Imogen escapes to her aunt’s converted lighthouse on Beachy Head. Writing for a tedious online magazine but hoping to start a novel, she wants to be alone until she finds an entrancing flamenco CD in her borrowed car and contacts the artist via Twitter. It turns out that actor-musician Santiago needs help with English, and is soon calling her profesora.

Through her window, the other lighthouse winks at her across the sea. The one where her father was a keeper, until he mysteriously drowned there in 1982. Her aunt is sending extracts from his diary, and Imogen is intrigued to learn that, like her and Santi, her father had a penfriend.

Meanwhile, despite their differences Imogen is surrounded by emotional and geographical barriers, Santi surrounded by family and land-locked Madrid their friendship develops. So, she reads, did her father’s but shocking revelations cause Imogen to question whether she ever really knew him.

Two stories of communication: the hilarious mistakes, the painful misunderstandings, and the miracle or tragedy of finding someone out there with whom you have an unforeseen, irresistible connection.

‘Cut! Let’s do it again, Santi.’ A dramatic wipe of the forehead; they are already behind schedule. ‘Ah, here’s Tania, that’ll help.’

Tania’s back in position next to the camera, patting at her blonde hair while she sips an iced coffee; if she’s bothered by Santi’s dialogue uncannily repeating what he said to her six months ago, she’s not showing it. But then, she’s an actress.

The sound crew have a problem, so there’s time for the sickening fear that he’s going to forget the words. He does forget the words, missing out two hard-learned lines – but gets a thumbs-up anyway.

‘Cut! Print it. Prepare for the two-shot.’

After some lines about not being able to commit to a relationship, he will soon be kissing her and laying her back on the sofa. Just as he did in real life. Except that in the drama the speech will come after the seduction; they’re only filming the shot in this more moral order to save time on lighting changes. Someone from make-up removes the sweat on their faces and combs out Tania’s ruffled curls. They get into position.

The body is your instrument, as they say in acting class. Her instrument duets with his, probably with a similar mixture of embarrassment and unwilling arousal. He has to be rather than act, so he’s remembering her pale hair on the cushion, her lithe, freckled body – while trying to forget how much adoration and hard work she needed, and the annoying American twang of her gasps. Then his phone starts vibrating in his pocket, and suddenly the English woman is in his head – and trousers – with her freckled body… What?

‘Cut! Print it. That was great Santi.’

Pleased to avoid a post-coital cafelito with Tania, he is soon speeding away from the slit-eyed, concrete face of the Faculty of Communication.

The air-con’s barely working; he’s sweating and smells of Tania’s floral perfume. But there’s no time to go to his apartment for a shower; he needs to get to his English lesson early and finish the homework. A sign flashes thirty-two degrees. But it isn’t just the heat, he wants to wash the whole day off: the rushed rehearsal, the static filming, the crappy dialogue. It’s no fun being an instrument when you’re being played by an idiot. It was different with Flamenco Academy; his few words were meaningful, and they welcomed his input when he had the courage to give any. If he does Lorca – well, it was going to be the young guy who’s won an award for that Civil War drama, so hopefully…

He parks in a shady corner of the Cultural Centre car park and groans with the effort of grabbing his books from the back seat. Opens the door. Sips from a lukewarm water bottle and feels both slightly nauseous and still strangely aroused.

His phone rings. ‘Hello gorgeous, am I seeing you tonight?’

‘Miri… We said Thursday, my love.’

‘But I’m at a friend’s in Arturo Soria, you could pick me up after your lesson.’

‘I know but… I’ve been shopping – believe me, you won’t regret it!’

He leans back in the seat and closes his eyes, wondering if he has the energy for whatever Miri has in mind. Just sometimes it would be nice to have a short, sharp shag.

Now that he’s going to be tied up for the evening – hopefully not literally – he checks his phone. There’s a message from Uncle Pedro saying he’s thinking of him today. Of course, it’s the anniversary of his father’s death. Thirty years. How could he have forgotten? But then that’s what happens when you fill your day with crap. He imagines his uncle reminiscing about their adventures on tour, the crash, his father desperately holding on to life because he didn’t want to leave his family. Well, at least his father doesn’t have to see his son playing a stereotypical gypsy on the TV.

Then there’s the English woman again, inviting him for an ‘English breakfast’ this morning. It’s worrying that she seems to be sending a message daily. He tries out various replies (I take breakfast at 05:30! / Yes! / Jajajaja!) and deletes them, but he presses on the website link and goes to the page where she can be seen sitting next to a computer and a pile of papers. An awkward, slightly toothy smile. Hair something between peach and chestnut. He feels bad about briefly ravishing her in his mind; she doesn’t look like she’d appreciate it. She’d probably rather sit outdoors with a big hat and have tea with him, like in that Importance of Being Ernesto film they were told to watch.

A text from Miri flashes up: her friend’s address and a grinning face with a tongue hanging out. It’s followed by one from Tania congratulating him on his performance – exclamation mark, exclamation mark – with the same emoji; what in hell was that supposed to mean? He closes their text bubbles and enlarges the picture of the English woman until her speckled face and jumpered small breasts fill the screen. She’s not exactly sexy, but having her would be like the simple, divine joy of tucking into a real-strawberry ice lolly. Cherry Radford was a keyboard player in a band, a piano teacher at the Royal Ballet School and an optometrist/post-doctoral researcher at Moorfields Eye Hospital before suddenly starting her first novel in the middle of a scientific conference in 2009. Following the publication of Men Dancing (2011) and Flamenco Baby (2013) by a small Brighton-based independent, The Lighthouse Keeper’s Daughter is her first novel with Urbane Publications. She left Moorfields in 2017 to concentrate on writing, but still enjoys teaching piano part-time. Cherry lives in Eastbourne and Almería (Spain).