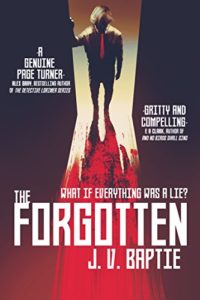 I’m so pleased to be able to share an extract today from The Forgotten by J.V. Baptie as part of the mini blog tour organised by Love Books Group Tours. I’d like to thank Kelly Lacey for the place on the tour.

What if everything was a lie?

Newly-promoted but not welcome in CID, Detective Sergeant Helen Carter is tasked with investigating a murder in an old abandoned picture house. The case takes a chilling turn when the business card of an ex-cop is found at the scene.

Helen must piece together the case before the bodies mount up around her, and before the killer strikes closer to home…

Delve into the underworld of Scotland’s capital city in this fast-paced thriller!

Praise for The Forgotten:

“Fans of Rebus will love this.” Thriller author, E.A Clark.

The Forgotten is published tomorrow – here’s the pre-order link.

She was swimming in the sea. The tide was against her; the waves splashed off her face. Salty water filled her nostrils and mouth. She struggled to keep her head above water. Tried to swim, gasping for air. Thrashing and kicking. The water filled her lungs as she sank further. ‘Help me. Help me. Please.’ She tried to scream… but nothing. A burst of energy. She thrashed again. Fighting with every muscle in her body. She started to move. Lights rippled in the water above. She surfaced, panting. A hand grabbed her head and pushed her back down.

A bus packed with schoolchildren pulled out in front of her. Helen trickled to a stop and rolled her window down a crack, taking in the icy November air. She liked this time of the year – the dark nights and mornings, the frost, and the good reasons to stay at home. Rows of pebble dashed houses lined both sides of the street, some with black bags of rubbish parked outside their gates. A milk float had stopped on the corner, and the milkman was now heading up the garden path of number 5. She tapped on her steering wheel. She was late and Craven wouldn’t like that. The bus driver stuck out a chubby thumb as a sign of thanks from his side cab.

Slipping the Mini into second gear, she took the left turn down a one-way road. This estate reminded Helen of one of the first cases she worked on – a string of petty robberies. A boy of about eighteen who’d do odd jobs for the elderly then rob them blind. She shook her head, remembering chasing him up the street with her little truncheon that was half the size of the ones given to her male colleagues, all the while, trying not to trip over her regulation handbag that kept slipping off her shoulder.

The fire-wrecked building was easy to spot. She watched the shaky single-decker bus accelerate away until it was a speck in the distance. The Boardwalk Picture House had been a triumph of 1930s Art Deco architecture. A once whitewashed building now grey with soot. All its windows either boarded up with chipboard or smashed over the years by kids, and what they couldn’t smash they’d sprayed graffiti on. She parked behind a Rover. Her stomach churned. She pulled the key out of the ignition and slipped it into her tan leather jacket pocket. Helen screwed her eyes shut and wished that time would stop. ‘In for two and out for two.’ She practised her breathing exercise and forced her eyes open. Analysing herself in the rear-view mirror, she noticed her brown eyes looked red and blotchy. Last night at Ted’s she’d only managed a couple of hours sleep before she was needed on shift.

A sharp knock at the passenger-side window pulled her back to reality. She let out a gasp and turned to see the broad features of Detective Inspector Jack Craven peering in. Her cheeks burned.

‘Are you coming in or what?’ Craven walked around to the driver’s side just as she was getting out and opened the door wide for her. He smelt sickly sweet – a combination of Old Spice and smoke.

‘I did wonder when you planned on showing up.’

‘I thought you lot were meant to be good at telling the time,’ Craven replied. He was wearing a brown tailored suit that had gone shiny at the cuffs. His yellow shirt was creased at the collar and looked slept in. The top two buttons were open, showing a sprinkling of salt and pepper chest hair. He didn’t seem to be that much older than her – a really handsome guy but his face had been hardened by drink. Even his eyes had a tinge of yellow in them.

He made a show of looking her up and down and smiled. ‘Well, at least we will have something nice to look at in the department. I didn’t mean to give you a fright, pet. Caught you doing your lipstick, eh?’ He looked braced to say something else but instead closed the car door and began to walk towards the crowd.

‘Thank you for this opportunity, sir.’

‘You don’t need to thank me.’ He slipped her a sideways glance. ‘Well, you’re not going to be here long anyway.’

‘I’m planning to be,’ Helen stated.

Not this again. ‘You don’t know that.’ She followed him. ‘I haven’t heard of this place before.’

‘Aye, is that so?’ He looked her up and down again. ‘Suppose you would’ve been too young.’

Craven snorted. ‘We’ve got a nice little one for your first job in CID.’

‘He was found by a couple of wee laddies this morning.’ Craven flicked his roll-up end into a puddle and fished in his pocket for his tobacco pouch. ‘You’ve no’ got any real fags, have you?’

‘Of course, you wouldnae.’

She shook her head. ‘Sorry.’

Craven’s smile faded. ‘I better get you up to speed on what we’ve got here. It’s not pretty in there. There’s no wallet or I.D. on him and the body’s practically still warm.’

‘Could it have been a robbery? Then maybe someone dumped him in an old building? Expecting him not to be found so quickly?’

‘Doubtful.’ Craven shrugged then lit his roll-up. ‘If you want to rob somebody, you don’t torture them slowly to death. Looks like the boy suffered and someone wanted him to.’

Helen’s stomach knotted at the thought and she changed the subject. ‘How long’s this place been shut down?’ Her leather handbag thumped against her thigh. She wished she had left it in the car.

‘Around five years. I think. The door was open and it looks like tramps have been dossing inside.’ He stopped in his tracks and turned to face her. ‘Right, let’s get this out in the open before we get in there. I’ve no’ had a WPC on one of my cases like this before.’  ‘I’m not.’

‘A WPC. It’s Sergeant Carter actually, Inspector, and I can assure you that—’

Helen bit down on her lip to stop her saying what she wanted to, that she wasn’t there because of her father. Even though that’s what they all said, it was easy to dismiss her that way. To ignore and belittle her. She thought back to when she told her dad she wanted to be in the police and he burst out laughing, then when he realised she was serious, he couldn’t hide the look of disappointment on his face and his comments about her waste of an education and how he wanted a better life for her.

‘I’m not here because of my dad, sir,’ she finally replied. ‘If I was, life would have been a lot easier for me. I’m here to fill your staff shortage and I’ll do my best for however long I’m needed.’

‘No, it is right.’ She took a step closer to him and frowned, not wanting to anger her senior officer further.

He gave her a wry smile. ‘Christ, I was only having a laugh, pet. Women dealing with cases like this in the CID, what’s bloody next?’

‘Me being here is nothing to do with anyone else. And this is not my first murder either.’ Her heart pounded. ‘So will we just get in there or do you want to stand out here chatting all day?’ Surprising herself at her own outburst. J.V. Baptie graduated from Manchester Metropolitan University in 2017 with an MA in Creative Writing. When not writing, she is also an actress and has appeared in a variety of children’s shows and stage plays.