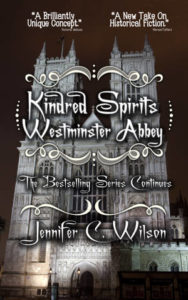 I’m delighted to be sharing an extract from Kindred Spirits by Jennifer C. Wilson today. My thanks to JB from Brook Cottage Books for the place on the tour. If you love historical stories which feature real historical figures, but with a difference, then this is the book for you. And there’s a chance to win the first in the series further down this post.

With over three thousand burials and memorials, including seventeen monarchs, life for the ghostly community of Westminster Abbey was never going to be a quiet one. Add in some fiery Tudor tempers, and several centuries-old feuds, and things can only go one way: chaotic.

Against the backdrop of England’s most important church, though, it isn’t all tempers and tantrums. Poets’ Corner hosts poetry battles and writing workshops, and close friendships form across the ages.

With the arrival of Mary Queen of Scots, however, battle ensues. Will Queens Mary I and Elizabeth I ever find their common ground, and lasting peace?

The bestselling Kindred Spirits series continues within the ancient walls of Westminster Abbey.

BUY ALL THREE BOOKS IN THE SERIES! So, to whet your appetite, here’s an extract from the prologue.

“No!” The anguish in Chaucer’s voice was clear. “We had him only three months back – surely we must pick again! Or, I shall pick. I pull rank, there must be a reselection.”

“Your grand-daughter? Add a few ‘greats’ in there, I think. Besides, you mean ‘Duke of Lancaster’, which any true royal relation should know already, don’t you think?” retorted Chaucer, determined not to let her have the last word. Again.

“Oh, come, come now. Our form is chosen, we must work with what we have.” The calm, steady voice of Charles Dickens broke into the midst of their argument. “Now, shall we re-assert the rules?”

Reluctantly, Mary-Eleanor and Chaucer nodded, and returned to their seats among the rest of the group. With the crowds of the day gone, and Evensong finished, the silence in Westminster Abbey was growing, and in the South Transept, the residents of Poets’ Corner had emerged from their various tombs to take their places, waiting for the monthly competition to start. The first Saturday of the month, every month, since 1343. Although, in fairness, for the first few years it had mainly been Geoffrey Chaucer amusing himself, trying desperately to get the other spirits of the Abbey to join him. It had never worked, no others being so literarily inclined. But now he finally had some competition. Each passing decade and century had brought a whole host of new poets, new writers and new styles.

This month, however, saw a return to the nineteenth century, and the doggerel poetry of William McGonagall.

“At least McGonagall isn’t here to complain about anything,” called Shakespeare, from the corner in which he was huddled with Kit Marlowe. Their heads were bowed over a new academic analysis of Shakespeare’s work, left behind by a careless student. The ghosts were nervous each time such a volume was released, for fear it would spark yet more debate as to the plays’ true authorship. Marlowe had enough fun taunting his friend without help from academics.

“Thank our lucky stars – he stays up in Edinburgh, apparently. I heard it from Mary Queen of

Scots herself, last time she visited,” said Jane Austen. The pride of associating with monarchs was clear in her voice.

“Anyway, to return to the rules,” said Dickens, bringing them back to the point in hand. “Only those writers who are actually buried here may participate. Each poet will contribute two lines of poetry. The order of competitors will be decided first come, first served.” At this he glared at Chaucer, daring him to try and contradict him. The poet kept his silence; Dickens continued. “Any poet not able to contribute two lines within one minute is dismissed from this month’s competition. All agreed?”

“I still don’t see why poets who aren’t buried here shouldn’t be allowed to take part. This rule is surely out-dated by now, and besides, it limits your competition.” Oscar Wilde raised his monthly objection from his position, reclining on the floor and staring up at the ceiling. “Also, think of the lovely collaborations we could run with – all these styles and ideas to play with.”

Rudyard Kipling spoke up. “Rules are rules, Oscar, and these have been in place for centuries, long before you deigned to begin to join us. Perhaps, going forward, we shall hold the odd open competition, but even then, they would be open to those who attend our meetings regularly, not those who simply arrive on Eurostar the day before.”

Did you like that? Fancy a bit more? Here’s an extract from chapter one.

Queen Elizabeth I of England was sulking. And not quietly, as the rest of the Abbey’s residents would have preferred. Despite her advancing years, she could still flounce in style, and was keen to ensure everyone knew what was annoying her this time.

“It’s so boring here!” she exclaimed, dropping gracelessly into one of the choir stalls. “Nothing ever happens.”

“She’s been to the Tower again,” whispered Catherine Knollys to her brother, but not quite quietly enough, as the queen’s friends and cousins wandered over to see what specifically had been troubling her this time.

“Yes, yes, I have. At least things happen there.”

“Our Uncle George still as entertaining as ever then?” Henry Carey tried to divert his cousin’s attention, but only made it worse.

“Naturally. He was haunting the barrel of Malmsey with Clarence, and it was hilarious, as usual. Scaring people out of their skins. That’s what we ghosts should be doing, not just loitering about discussing experiments.” She glared at where Charles Darwin and Robert Stephenson were once again in deep conversation, sitting out of the way of the early tourists starting to make their way through the great church. Without a word, Darwin glared at her, then shifted in his seat turning his back against her, much to Elizabeth’s disgust.

“We do plenty of haunting, Cousin. It’s just that, well, you know the Abbey’s never really lent itself to that.”

“No, Catherine – everyone has simply become too old and too dull over the centuries. And too weak to stand up to my wretched great-grandmother. It’s all her fault.”

Catherine and Henry shot nervous glances at each other. When Elizabeth was in one of these moods, little could be done to stop her. Even her beloved Dudley had retreated back to Warwick after witnessing one of her angrier days. Before either could speak again, their cousin had moved on, stomping through the Abbey until she found the memorial to William Pulteney, the Earl of Bath.

As though knowing what was expected, the book in the centre of the statue flicked pages in silence. It wasn’t good enough.

“See? See that? A page of a statue’s book turning. Over three thousand of us in here, seventeen monarchs, no less, as the guidebooks tell us, and that’s the best we can come up with?” Queen Elizabeth spun on her heel, turning back to the siblings. “At the Tower they have my mother removing her severed head, with my step-mother and my aunt alongside her. They have a young, robust King, leading the way forward. They have wailings and chain-rattlings and, well, everything. We have a statue, turning its page.”

By now, a crowd had grown around the Queen, noting, not for the first time, how similar she was to her great-grandmother when her temper really took hold. Fiery Tudor blood indeed.

“We’ve talked about this, Elizabeth.” The chattering and ranting was broken by the only voice which ever had any control over the wayward Queen.

“Now she’s in trouble,” Mary-Eleanor smirked to her companion, only to receive a regal nudge in the ribs from Anne of Cleves.

Edward the Confessor moved slowly through the group, not troubling himself with meeting anyone’s eyes, but knowing they would move for him. They always did.

“We do not waste our time with such infantile behaviour here, Elizabeth, as well you know. We have held meetings.”

“Then we should hold more,” Elizabeth protested. “Otherwise, what is the point of us being ghosts?”

“Spirits,” the Confessor corrected her. “We use ‘spirits’ here. I don’t like ‘ghosts’.”

“Either way, we should be haunting. Surely even just a couple of calm visitations. You’ve never had a problem with Father Benedictus.”

“The good Father has his reasons for still being here. And he does the people he talks to no harm whatsoever. The souls of the Tower are troubled; they know no better than to disturb the peace of the living. Those of us here, we are not of the same ilk.” He glanced at Mary-Eleanor, knowing that of all those present, she would be the second most likely to argue with him. But instead she lowered her head in a slow, graceful nod, not uttering a word.

“I trust this matter is dealt with.” The Confessor ended the conversation and headed back to his shrine. Enrolling on an adult education workshop on her return to the north-east reignited Jennifer’s pastime of creative writing, and she has been filling notebooks ever since. In 2014, Jennifer won the Story Tyne short story competition, and also continues to work on developing her poetic voice, reading at a number of events, and with several pieces available online. Her Kindred Spirits novels are published by Crooked Cat Books. In October 2017, she celebrated Richard III’s birthday by releasing her first timeslip novella, The Last Plantagenet

Enrolling on an adult education workshop on her return to the north-east reignited Jennifer’s pastime of creative writing, and she has been filling notebooks ever since. In 2014, Jennifer won the Story Tyne short story competition, and also continues to work on developing her poetic voice, reading at a number of events, and with several pieces available online. Her Kindred Spirits novels are published by Crooked Cat Books. In October 2017, she celebrated Richard III’s birthday by releasing her first timeslip novella, The Last Plantagenet.