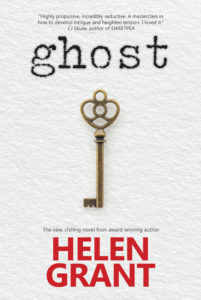 Welcome to my stop on the blog tour for Ghost by Helen Grant. I have a great extract to share with you today. I’d like to thank Kelly Lacey from Love Books Group Tours for the place on the tour.

Langlands House is haunted, but not by the ghost you think.

Augusta McAndrew lives on a remote Scottish estate with her grandmother, Rose. For her own safety, she hides from outsiders, as she has done her entire life. Visitors are few and far between – everyone knows that Langlands House is haunted.

One day Rose goes out and never returns, leaving Augusta utterly alone. Then Tom McAllister arrives – good-looking and fascinating, but dangerous. What he has to tell her could tear her whole world apart.

As Tom and Augusta become ever closer, they must face the question: is love enough to overcome the ghosts of the past?

In the end, Langlands House and its inhabitants hold more secrets than they did in the beginning…

Ghost is available now in ebook and paperback.

I used to dream of someone from the outside coming to Langlands. I dreamed of a friend before I even knew what that was.

I didn’t lack company. Grandmother was always there, except on the rare occasions when she went into the nearby town for things we couldn’t make or grow or find for ourselves at Langlands. She was never too busy to talk to me; in fact, sometimes I had the feeling she pushed herself to do it, to amuse me or to tell me things she considered educational. She told me about the assassination of Julius Caesar while kneading bread dough so forcefully that it might have been the assassins’ heads she was pummelling. Another time, I remember listening to her describing the life of Mary, Queen of Scots while we pulled up carrots and potatoes from the earth, shaking them to loosen the clinging soil.

It wasn’t as though I was always alone, or never heard the sound of another voice. I simply felt that there could have been something else. The idea was somehow shapeless; I couldn’t think how or why things would be different with a friend to the way they were with Grandmother. They just would be.

I would daydream about someone being there with me – someone my own age. Sometimes when I had no chores to do and was free to roam around the house and grounds, I would imagine that this someone was with me, keeping step but a little way behind, so they were just invisible, even out of the corner of my eye. It was understood that I was too polite to turn around suddenly to catch them unawares. Since we never entertained, I had no idea how I was supposed to amuse a guest. So I would show them Langlands, as a way of showing them my life.

Langlands was a fortress and a labyrinth and a treasure chamber all rolled into one. There were bedrooms and sitting rooms, dressing rooms and store rooms, and funny little circular rooms in the turrets that were no use for anything because you couldn’t put furniture against the walls. It had a grand main staircase, with newel posts carved into stylised thistles that looked more like fat artichokes, and other, hidden staircases once used by servants. There were servants’ passages, too, so that the long-vanished staff of Langlands House could move about discreetly. I wondered whether their footsteps had been audible. I thought so, because in every part of the house the ancient floorboards creaked and groaned under passing feet. It must have been strange, I thought, to hear the sound of someone pattering from one end of the house to another, without being able to see them. Perhaps that was how Langlands had acquired its reputation for being haunted.

Some of the rooms were not in a state to be used – they were full of lumber, or empty, or closed up completely. Two of us could hardly use so many rooms, after all, let alone heat them all properly. We had a bedroom each, furnished with some of the best things in the house, although the rooms themselves had been selected on the basis of which held the best beds, since it was completely impossible for the two of us to move anything so heavy by ourselves. A long time ago, back in a time my memory could not reach, I shared Grandmother’s room, but as soon as I was old enough to have my own, I had moved to my current one at the other end of the passage because I liked the iron bedstead and the green velvet curtains.

What a great extract! Helen Grant writes thrillers with a Gothic flavour and ghost stories. Her first novel, The Vanishing of Katharina Linden, was shortlisted for the CILIP Carnegie Medal and won an ALA Alex Award in the US. Her other books include the exciting Forbidden Spaces trilogy.

Helen’s latest novel Ghost (Fledgling Press 2018) is set in Perthshire, where she has lived since 2011. When she is not writing, Helen loves to research the lost country houses of Scotland and to visit the sites where possible. Her experiences of exploring these fascinating places inspired her to write Ghost.