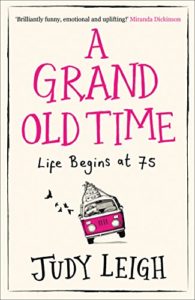 I’m delighted to be sharing an extract from A Grand Old Time by Judy Leigh with you today. This is another of those pesky times when I would have loved to have fitted in a read of this book, it sounds like so much fun. I’d like to thank Sabah Khan from Avon Books for the place on the tour and the review copy (oh and the lovely little bottle of wine that came with it). Evie Gallagher is regretting her hasty move into a care home. She may be seventy-five and recently widowed, but she’s absolutely not dead yet. And so, one morning, Evie walks out of Sheldon Lodge and sets off on a Great Adventure across Europe.

But not everyone thinks Great Adventures are appropriate for women of Evie’s age, least of all her son Brendan and his wife Maura, who follow a trail of puzzling text messages to bring her home.

When they finally catch up with her, there are shocks in store . . . because while Brendan may have given up on life and love, Evie certainly has not.

A Grand Old Time is out now in ebook and from 3rd May in paperback.

Evie was talking to herself. In the airport lounge, sitting with a caramel latte that tasted like creamy pudding. She decided that she was telling herself it was delicious and she liked this modern coffee. As she stared at the froth in the cup an hour later, a clipped voice announced over the speakers that the plane would be delayed for an hour.

She drank two more coffees, visited the toilet twice and, when she sat down again, she noticed her hands were shaking. She watched as other passengers picked up luggage and moved excitedly as if flying was quite normal. Her breathing had become shallow and she wondered if she shouldn’t buy herself a small brandy. When they called her flight number, she whispered to herself that people flew on planes every day and what on earth was she so worried about.

In the aeroplane, sitting by the window, lost in thought, she muttered to herself that flying in an aeroplane was quite safe, nothing bad ever happened, well, not often, only in the films. It was a spur-of-the-moment decision, to take her life in her hands and fly in a plane, to do something she’d never done by herself, to be up in the air for over an hour and to go shopping with her winnings. She’d never been on an aeroplane alone before, but she didn’t regret it, no, not at all.

Other people were looking at her. She was becoming one of those mad old ladies who talked to themselves because they had nobody else to listen. The flight to John Lennon Airport would only take a short time, it would soon be over and she would touch down in England. The last flight she had made was with Jim to Majorca five years ago and she had squeezed his hand all the way there.

Jim. Evie shook her head; he had been alive last year, but gaunt and coughing in a hospital bed. The sheets were a shroud the day he died and when she returned home the house still smelled of stale cigarettes and the aftershave he wore, once warm and alive. It was a summer day but everywhere was filled with cold.

She fiddled with her safety belt. ‘Calm down now, Evie. There’s nothing at all to worry about. It’ll be grand once you get there.’ Judy Leigh completed an MA in Professional Writing at Falmouth University in 2015, leaving her career of 20 years as an Advanced Skills teacher of Theatre Studies. She has had several stories published in magazines, including The Feminist Wire, The Purple Breakfast Review and You is for University. She has also trained as a Reiki healer, written a vegan recipe blog and set up a series of Shakespeare Festivals to enable young people to perform the Bard’s work on stage.