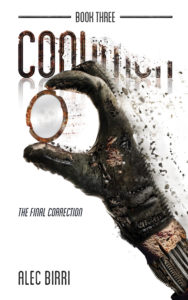 I’m delighted to be posting today as part of the blog tour for Condition: The Final Correction by Alec Birri. It’s the third in a trilogy of dystopian novels.

What if all brain disorders were treatable? No one would lament the passing of dementia or autism, but what if the twisted mind of a sex-offender or murderer could be cured too? Or how about a terrorist or maybe a political extremist? What if we could all be ‘corrected’?

So, Professor Savage has been unmasked as the monster Alex Salib always knew he was. But what was their agreement and why is she still determined to see it through? The war on terror appears to be back on track but why does President Kalten seem hell bent on ramping it up – are the Americans seriously intent on starting World War Three?

And what of the treatment itself? Despite Savage’s arrest, the ‘corrections’ go on but to what end? The laws of unintended consequences are about to cause a seismic shift in the very nature of our existence. But then our new masters know that and won’t let it happen until we’re ready…
…Ready to accept the unacceptable.

The first part of this section of the book can be found over on The Tattooed Book Geek’s blog so please do pop over there first and then come back and read the extract below.

‘Sorry to bother you, Sir John, but the prison’s governor would like to see you.’

‘The governor, no less!’ Savage walked up to the Astaff. ‘Any news on something just a little more pressing than a social visit?’ The robot stared back in silence.

The professor didn’t bother prying any further. They commenced the journey, and he spent the time musing on why those inmates who spotted him didn’t immediately hurl abuse. The unconscious placement of the occasional hand on a belly explained it.

Prisoner and escort reached the prison’s administrative section. Savage’s eyes moved from door to door as they traversed the corridors in the hope of identifying a server room. He was so busy learning the layout of the place that it was a while before he realised it was deserted – no secretarial, clerical or any other admin staff for that matter. Their computer terminals were absent too.

They rounded a corner and the sight of two be-suited and heavy-set men standing in front of a door marked “GOVERNOR” made Savage realise the man inside had little if any interest in the facility’s operations.

‘Dammit! I was hoping to surprise you.’ Kalten glared at his two secret service agents. ‘I told you no one in England wears Ray-Bans indoors. Get out!’ The men-in-black looked at each other before leaving the room.

‘Same way some convicts leave a prison, of course – back of a laundry van.’

Savage turned his head to one side. ‘What’s happened to your accent?’

‘Well, being a “good ol’ boy” might get the voters out in the Deep South, but when it comes to the world’s stage, I thought something a bit more mid-Atlantic would be appropriate. Drink?’

Savage smiled at the bottle of Macallan. It helped mask his mirth at what he was hearing – a redneck impersonating a southern gentleman impersonating the actor, Cary Grant.

Kalten offered a glass, but Savage just looked at the whisky.

‘Don’t worry, there’s nothing in it there shouldn’t be.’ He studied his captive. ‘Or perhaps you’re no longer capable of neutralising a sedative?’

Savage didn’t answer and closed his eyes while savouring the single malt’s aroma. He opened them again. ‘World’sstage?’

‘Of course. If I’m to be the planet’s saviour, then it’s only right the chosen one should be suitably rewarded.’

‘The chosen one. Saviour.’ The professor proposed a toast to megalomania and the President accepted.

Kalten put down his glass and picked up a tablet computer. ‘Got to hand it to you, Johnny. I always thought these things were good for little more than watching clips of funny animals or playing games but how you’ve taken Mengele’s work to a whole new level is nothing short of astonishing. You promised I wouldn’t be disappointed and you were right. Not only can I change my accent whenever I feel like it but everything else about me too – just as soon as my engineers get around these darn timers.’

Savage poured himself another drink. ‘That would be inadvisable – the timers are there for a reason. Access the more extreme capabilities too soon, and your plans for world domination could be thwarted by something as simple as a cardiac arrest.’

Kalten smiled. ‘You think I care about this body? This over-sized, over-engineered hunk of an ex-knucklehead? You might be decades ahead of me in intelligence, but we’re the same physically – living on borrowed time, thanks to our maker.’ He moved to sit in the governor’s chair but scowled at it instead. ‘At least you can use the average piece of furniture.’

‘You’ve come a long way and in a great deal of secrecy.’ Savage looked at the office’s entrance. ‘I take it you can’t be bothered with the legal process of an extradition, and I’m about to be bundled into the back of the laundry vehicle you mentioned earlier.’

Kalten appeared offended. ‘Good God, no. The world might be keen to bring you to justice on charges of treason and genocide but what I need can be sorted right here and now.’ He handed over the tablet.

Savage tried merging with it but soon realised it wasn’t connected to anything. He looked back up to be met by one of the President’s unsettling grins.

‘Despite the treatment, compared to you I’m still stupid, but not that stupid.’ He gestured at the iPad. ‘The protocols, if you please.’

Kalten dropped the smile. ‘Don’t be coy. The protocols needed to access the AI that controls the world’s trading centres, defence systems, medical facilities and anything else you’ve seen fit to put beyond a human being’s reach.’

‘But you already have them.’

‘Nice try, Johnny. You know full well we did have them but surprise surprise, that changed the moment you were arrested.’

Savage hid his concern. He had hoped the feared level of AI consciousness would be localised, but that clearly wasn’t the case.

‘Then my plans to wipe out Islam for good must go on hold while our experts find a way around them, but in the meantime and in the interests of international diplomacy, I’ll agree to hand you over to the Israelis – assuming the state still exists.’

The professor studied the iPad. ‘You’ll be wiped out, you know. You won’t stand a chance.’

‘What? Against a bunch of ragheads?’

‘No, against our new master.’

Don’t forget to check out the other blogs taking part in the tour. Alec Birri served thirty years with the UK Armed Forces. He commanded an operational unit that specialised in new military capabilities classified at the highest level (Top Secret Strap 3) and it is this experience that forms the basis of his novels.

Although semi-autobiographical, for national security and personal liberty reasons, the events and individuals portrayed have to be fiction, but are still nonetheless in keeping with his experiences.