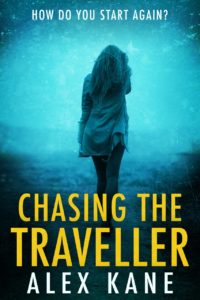 I’m delighted to welcome you to my stop on the blog tour for Chasing The Traveller by Alex Kane. Thank you, Alex, for asking me to be part of it and for answering my questions which you will find below.

So, what’s Chasing the Traveller about?

‘I’ve fled from my husband and the only life I’ve ever known. I’m terrified that if he finds me, I’ll never find myself.’Kat is trapped in a world where she has never belonged. As a traveller, she has always felt lost, especially since the death of her parents in a fire when she was fourteen years old. Having been taken on by the Denton family as their own, Kat falls in love with their son, tearaway Jimmy. His charm soon wears off and Kat finds herself married to a controlling and violent thug.Sixteen years later, Kat decides enough is enough and begins plotting her escape from a lifetime of abuse.Stripped of her personality, Kat has no idea how to start again but she finds an unlikely ally in her sister-in-law Ellie who shows Kat that she is not alone.Kat and Ellie Denton begin their venture into a new world, where they meet new people and build new lives. But Kat still wants to know more about her parents’ past and when she seeks the location of an address on the back of a family photograph, Kat begins to uncover more than she expected including a revelation that will lead Kat back to the traveller site she had been so desperate to escape from.Will she find the answers she is looking for, or will she fall prey to the violent Jimmy Denton once more?

And if you like the sound of it then it’s available now in ebook and paperback.

1. Where did the idea come from for Chasing the Traveller?

2. Why did you decide to make Kat, the main character, part of the travelling community and how important is a sense of place in your writing?

I love Kat. She is very vulnerable and easily influenced by Jimmy in the beginning. Kat was born into the travelling community and so she had no choice. However, she ends up having no choice but to leave. I wanted to write something different to what’s out there and so I thought the travelling community would be something different to base the story around.

3. Can you describe Kat in no more than twenty words?

Kat’s vulnerable, a lost soul without a sense of place. Outwardly she is weak, inside there’s a warrior awaiting escape.

I am not one for plotting in the sense of having post-it notes everywhere. I write a basic idea in my notes then I go for it. I sometimes I have an idea of what will happen at the end, but sometimes that can change. Sometimes my characters do things that surprise me.

I actually still have a day job. I work in early years by day and write by night. I do aim to write full-time one day.

Normally, I write at the dining table. It’s where I have the most space. I don’t have a daily routine due to the day job. So I normally write when I can, mostly evenings and weekends.

I love psychological and domestic thrillers. The one book that I just can’t get over is Behind Closed Doors by BA Paris. That book absolutely floored me, it written perfectly and I just loved the end.

Not really. I do like to listen to acoustic/instrumental music when I write, depending on the scenes I am writing. I love Olafur Arnalds and Ludovico Einaudi.

I am writing another psychological thriller based around forced drug addiction and trafficking within religious cult. The working title is, ‘Where the River Swells’, however that may change. It is in the early stages but I am really enjoying it right now.

Thank you so much for such interesting answers, Alex. Alex Kane is from Glasgow and writes psychological thrillers. Her newest novel, set to be released late 2017 is set in several towns and villages in and around Glasgow, most of which she is familiar with. She loves to read whenever she can and her favourite genre is psychological thriller and crime. She loves something that will get under her skin and make her think about the story long after she has finished it. Inspirations are BA Paris, Lisa Hall and Paula Hawkins. Alex is currently working on her new novel.