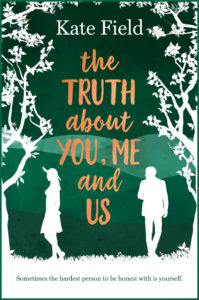 #blogblitz – The Truth About You, Me and Us by Kate Field @katehaswords @BrookCottageBks #extract #giveaway

I’m very pleased to be taking part in the blog blitz for The Truth About You, Me and Us by Kate Field today. Thank you to Brook Cottage Books for the place on the blitz. I’ll be sharing an extract with you and there’s also a fabulous giveaway but first let’s see what the book is about.

Sometimes the hardest person to be honest with is yourself…

Five years ago Helen Walters walked out on her ‘perfect’ life with the ‘perfect’ man. Wealthy, glamorous and bored, she longed for something more.

But when her past unexpectedly collides with her new life, Helen finds herself torn. She knows what the easiest choice is, but is it what she wants?

Helen transferred her gaze to Daniel, and allowed herself a few moments to absorb those familiar features again. Then she took a generous swig of vodka and nudged her way through the crowded room to the window.

He broke off from what he was saying, and looked at her for the first time in over four years. Initially his face was blank, polite; then he bent forward a little, and studied her. His eyes travelled slowly up and down. She waited, gazing steadily back, amazed by her own stillness.

‘Helen?’ It was barely more than a whisper, and caused a tremor in her out of all proportion and expectation. But the sight of Tasha flashing gleaming white teeth, and rubbing her hand up and down his back, was the slap she needed to recover control.

Ignoring Tasha, he stared at Helen.

‘You look… different,’ he managed at last. Then he actually shook himself, and straightened up. ‘This is Tasha. Tasha, this is Helen… Is it still Walters?’

The chip of ice in his voice took Helen by surprise. Goosebumps crept up her arms.

‘You haven’t married since we last met?’

‘No. A bad experience put me off commitment.’

There was nothing in his eyes but anger. He couldn’t be faking this. He really did seem to hate her. They stared at each other, his eyes hostile, hers confused, then Tasha laughed and linked her arm in his.

‘But I’m trying to put you back on to commitment, aren’t I?’

‘If you can’t, no one can.’ Daniel turned his head and kissed Tasha hard on the lips. Helen felt it like a punch. But what had she expected, really? That he would see her again and take her into his arms, the last four years forgotten? She gulped her vodka, knowing that part of her had hoped for exactly that, and had done since the day she had let him go.

Tasha was either oblivious to the tension, or tactful enough to change the subject. Helen didn’t feel inclined to give her the benefit of the doubt.

‘I do. And those hands happen to be mine.’

‘Wow! I thought your name sounded familiar.’ Helen couldn’t help a flash of satisfaction at Tasha’s evident admiration. ‘Hey Danny, you didn’t tell me you had such clever friends.’

‘I was only doing it as a hobby before,’ Helen replied. ‘What do you do?’

Small talk with Daniel’s girlfriend! She had never imagined that it would be like this if they met again – and in over four years apart, she’d had plenty of time to role-play every possible scenario in her head. But it had honestly never occurred to her that he would simply stand by and shoot her with looks of animosity. And this was before he found out that he had so much more reason to dislike her than he knew.

Like the sound of it? Then here’s the buying link you need. Kate writes contemporary women’s fiction, mainly set in her favourite county of Lancashire, where she lives with her husband, daughter and hyperactive cat.

She is a member of the Romantic Novelists’ Association.