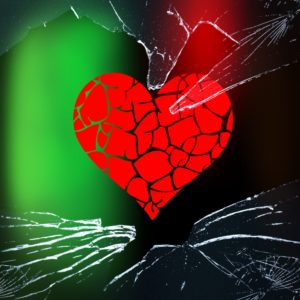 I recently reviewed the fabulous book, The Man in the Needlecord Jacket, by Linda MacDonald and you can read my review here. One of the main characters, Sarah, has been with her partner, Coll, for 10 years but he treats her badly. He doesn’t hit her but he psychologically abuses her by calling her a liability, amongst other things. Linda has written a brilliant guest post for Short Book and Scribes about the nature of this kind of abuse. Over to Linda….

Psychological Abuse: Another Shade of Grey

There are no bruises to illustrate the pain; no blood or broken bones. Only a shattered heart and psyche often glued together piece by piece, to be smashed again and again by a partner.

He may be a perfect gentleman most of the time. But a long night out with his mates in the pub, or a bottle of wine at home and the restraint comes off. He chooses to undermine her, call her names and blame her for everything that he perceives is wrong with the relationship. The problems, the unhappiness – even his lack of love – are all her fault. He may humiliate her in front of others, or use sarcasm to make her feel worthless and to draw attention to her shortcomings. And then he may say she is too sensitive when she reacts. He may control how she dresses or spends money; he may make unreasonable accusations. He is always right and he makes excuses for his own failures. He may withdraw and neglect in order to get what he wants, withholding sex or becoming emotionally unavailable. He plays the victim and shows no empathy or compassion.

Such is the nature of psychological abuse. It’s verbal rather than physical and often it’s a grey area with a blurred line between what is normal or reasonable and what constitutes stepping over into unacceptable territory. After all, most couples argue or have rows and some say it’s healthy to do so. But when arguments turn to threats or to bullying or constant criticism, or when there is excessive manipulation to control the partner, this would be considered abusive.

At the end of 2015, a new law was introduced making it a criminal offence to adopt coercive and controlling behaviour in a close relationship. This would only be applicable in extreme cases and much psychological abuse would not be considered serious enough to involve the law. But that doesn’t make it okay. There are many instances of lower level psychological abuse that have devastating effects on the victims.

Who are the abusers?

Why Do People Stay?

People stay in psychologically abusive relationships for the same reason as they often stay in those that are physically abusive. It may be through fear of being alone, or fear of what he may do if she leaves. Or it may be for ‘the sake of the children’ or for financial reasons. The victim may also be made to feel responsible and that criticism is justified. But although difficult for others to understand, people often stay because they are still attached, even still in love. The psychologist Leon Festinger said, ‘Rats and people love that for which they suffer.’ This was in part to explain his theory of Cognitive Dissonance which suggests that holding two non-consonant cognitions is psychologically unsettling. We therefore introduce a third cognition to restore balance. So in this case, ‘He is mentally abusive to me’ and, ‘I stay with him,’ are the two non-consonant cognitions. ‘But I love him,’ or ‘He can’t help it, he had a rough childhood,’ or ‘It’s my fault, I’m difficult to live with,’ or, ‘We have a great time when he’s being nice,’ provide the third cognition to restore the balance and justify staying.

I wrote The Man in the Needlecord Jacket because I heard a story of mental abuse and was inspired to research the subject and turn it into fiction. There will be many who read it who will find it unbelievable that the victim, Sarah, should stay with her partner, Coll. But people do. This is real life. When young people become involved in such relationships, they may move on, wiser, and say they would never become involved with such a man again. They know the signs and back off early. And in a new relationship, it is easier to walk away. However, in The Man in the Needlecord Jacket, Sarah has been in the relationship for over ten years and has committed to a future. It’s a big investment of time, of life, and therefore much more difficult to escape.

What should people do?

If all attempts to solve the problem through discussion haven’t worked, the obvious answer is to leave the relationship. But if unwilling or unable to do this, there are various strategies that may help. Here are some key suggestions.

Thank you so much for such an interesting post, Linda. I do hope that nobody reading my blog is suffering from this kind of abuse but if they are then I hope this helps them.

I heartily recommend The Man in the Needlecord Jacket. The buying links are on the review post along with all the information you need to know about Linda.