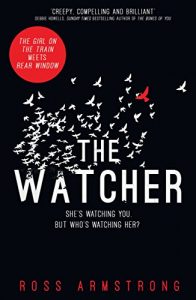 Lily Gullick lives with her husband Aiden in a new-build flat opposite an estate which has been marked for demolition. A keen birdwatcher, she can’t help spying on her neighbours.

Until one day Lily sees something suspicious through her binoculars and soon her elderly neighbour Jean is found dead. Lily, intrigued by the social divide in her local area as it becomes increasingly gentrified, knows that she has to act. But her interference is not going unnoticed, and as she starts to get close to the truth, her own life comes under threat.

But can Lily really trust everything she sees?

Well, this book wasn’t what I was expecting at all!  Lily Gullick, the main character, is a bird watcher and lives in a block of flats by a reservoir.  In true Hitchcock style she ends up watching the people in neighbouring blocks and sees things that she wishes she hadn’t.

Lily is the ultimate in unreliable narrators and finds herself in all kinds of bizarre situations.  The story starts quite oddly and I did wonder at the beginning if I was going to like it but then I found myself pressing the button on my Kindle as fast as I could as I got more and more engrossed in Lily’s rather kamikaze search for her neighbour’s killer.  It did take me a while to get to grips with the way it was written.  It was like I didn’t fully understand what was going on and who Lily was addressing, as she is telling her story to a third party rather than to the reader.   But then I started to get a bit suspicious and all of a sudden it all slotted into place.  A lot of things made sense but still there was this unreliable narrator and right up the end I didn’t know what was real and what wasn’t.

The Watcher is definitely a page turning psychological thriller.  Sometimes quite comical with some heart-stopping moments in there, this is probably one of the most unique books I have read for a while.  I actually quite liked Lily and I thought the way the author combined her search for a killer with bird watching techniques and ways of recording sightings was really clever. Being a nosy parker myself, I could sort of understand how interesting she found it to peer into her neighbours’ lives, although it did all get rather out of hand!

It’s a riveting read and it’s a little bit bonkers. It’s an accomplished debut novel from a writer with an unusual style.

Thank you to the publishers and Netgalley for the review copy.  The Watcher was published on 29th December by HQ.