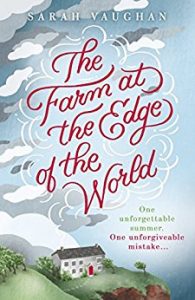 Happy Publication Day to Sarah Vaughan.  Her book, The Farm at the Edge of the World, is out in paperback today.  It was one of my top reads of last year and in fact her first book, The Art of Baking Blind, was one of my top reads of 2014, so I guess you could say I’m a bit of a fan.  I’m sharing my review of the book further down this post but first I’m thrilled to have a guest post from Sarah in which she talks about her inspiration and writing that tricky second novel. Sarah and her sister, aged 9 and 11, in the area that inspired the novel.

The Farm at the Edge of the World emerged out of my desire to write about a place that holds huge emotional significance for me – the cliffs of north Cornwall to the west of Padstow – and my wish to create characters nearing the end of their lives who were still haunted by dramatic events in their past.

My first novel, The Art of Baking Blind, featured a time-slip story set in the 1960s but I wanted to go back to the second world war: the last time people in Britain had to be truly brave and a time fraught with dramatic potential. By creating a secret that wasn’t allowed to unravel for seventy years I hoped to intensify its poignancy and the novel’s sense of suspense. We know there’s a secret – something an 83-year-old has to atone for – we just don’t know what it is or when it will be revealed.

None of this made for an easy second novel, however. In fact it made my archetypal tricky second novel even more difficult. First, I had to research the Second World War and its impact on Cornwall; then I had to balance my past and present story lines so that both complemented the other and neither was disproportionately light or dark or more dominant. I’ve written before about a novel being like a piece of music: a Baroque counterpoint in which both lines of melody must reflect and balance one another. When creating this novel – with one storyline set in 2014 and the other in 1943-4 – I felt this pressure even more. At first I got it wrong. My problem was that I was just too interested in the past story which initially held most of the dramatic heft. Inspired by my Cornish farming great grandfather, I’d researched it extensively – even interviewing a trio of octogenarian farmers, from the region who were all teenage boys in 1943-4. I’d made several trips back to the region as well as to the Imperial war museum and Cornish war museums yet had invested less emotion in the present day strand of the novel and had instead tried to play it safe. When I submitted my manuscript to my then editor she pointed out that the contemporary story felt too light for the past and needed to be more emotive and darker in its own right. Bodmin Moor in the mist

For what I thought of as draft 4, I ripped out 30,000 words – which would eventually become 55,000 – and rethought the storyline for Lucy, my contemporary protagonist. I also focused on drawing parallels between specific dates and settings, so that the history of this family – the sense of secrets being passed down through the generations and resonating with the inhabitants of my farmhouse – intensified. Still not happy with having caught the essence of my novel, I returned to Cornwall specifically to explore Bodmin moor – where a crucial reveal occurs. I wanted to capture the smell: damp grass, musky bracken, honeyed gorse; and to feel the mizzle that reminded me of how bleak and inhospitable any moor can become.

Fired with these new images and sensations, and now on draft seven or eight, I filled the novel with this sense of place only to trim them back at the edit stage: 8,000 words describing the sea and the Cornish hedgerows are now hidden away in an iMac file. But it was only by rewriting and honing these descriptions that I discovered the muscular heart of The Farm At The Edge Of The World. For this novel about love, loss and atonement is above all else a love letter to an intensely beautiful but also potentially desolate area: the place packed tight with childhood memories; a spot not far from where my mum’s Cornish ancestors farmed.

It may not have been the easiest novel to write but it’s one of which I’m proud. Because, through reworking its structure, and teasing out those different threads, I became a better writer.

Phew, it sounds intense but it produced the most beautiful story.  Thank you for visiting Short Book and Scribes, Sarah. Here is my review:

I was a big fan of Sarah Vaughan’s first book, The Art of Baking Blind, so I was looking forward to The Farm at the Edge of the World, but also approached it with trepidation. What if I didn’t love it? What if it didn’t live up to my expectations? Well, I’m happy to report that it more than exceeded my expectations and I absolutely loved it.

For a relatively short book, it took me a little longer to read because I wanted to savour every word. Usually, when I get towards the end of a book, I can speed up but with this one I felt like I didn’t want to rush it.

The Farm, the one at the edge of the world, is in north Cornwall. In 1944, Maggie is a teenager on the cusp of womanhood, living on her family’s farm. Will and Alice are evacuees who go to live there. Something momentous and terrible happens in Maggie’s life and in 2014, 70 years later, things finally come to a head. At the same time, Maggie’s granddaughter, Lucy, returns to her childhood home after being desperate to leave years earlier. Her marriage may be over and her career is floundering and maybe her old home isn’t so bad after all.

Firstly I’d like to say how much I enjoyed Sarah Vaughan’s writing. There is a love story and the descriptions of the depth of feeling are exquisite. Often with time slip novels I find I enjoy the more contemporary story more than the one set in the past but in this book I enjoyed both equally and found both to be moving, full of emotion and intensity.

Farming is hard and that comes across here, particularly in the 2014 storyline. There are some quite harsh scenes but in portraying a working farm you can’t make it all about cute animals and scenery. The remote, sometimes beautiful, sometimes brutal setting is very atmospheric.

I love the device of flitting back and forward between two different periods, but I know some struggle with a non-linear style. I think it helps it all to unfold and it worked very well for me and kept me turning the pages to find out what happened, sometimes with a sense of foreboding as I could see how the story was going.

This is a really lovely story with interesting and well-drawn characters. I’d highly recommend it. Sarah Vaughan was brought up in Devon and read English at Oxford. After training at the Press Association, she worked on the Guardian for 11 years as a news reporter and then political correspondent. Following the birth of her second child, she started freelancing and writing her first novel. The Art of Baking Blind, sold to nine publishers, was the result. The Farm at the Edge of the World, will be published by Hodder in paperback on Jan 12 2017. Anatomy of a Scandal will be published by Simon & Schuster in the UK and US, and translated into 13 languages, from Jan 2018. She lives in Cambridgeshire with her family and is just starting her fourth novel.

The Farm at the Edge of the World is published by Hodder and is available now in paperback or ebook.