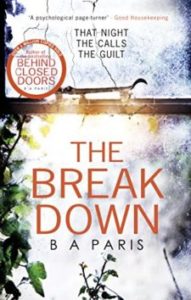 The Breakdown by B A Paris @BAParisAuthor @HQStories #bookreview #suspense

Posted on 9th February 2017 By Nicola

If you can’t trust yourself, who can you trust?

It all started that night in the woods.

Cass Anderson didn’t stop to help the woman in the car, and now she’s dead.

Ever since, silent calls have been plaguing Cass and she’s sure someone is watching her.

Consumed by guilt, she’s also starting to forget things. Whether she took her pills, what her house alarm code is – and if the knife in the kitchen really had blood on it.

This is Cass Anderson’s story, told in the first person which means that the reader never quite knows whether Cass’s account of events can be trusted or not. Having had a mother with early onset dementia, when Cass starts to forget things she wonders if she is going to have the same condition. Husband Matthew and best friend Rachel are rocks for her as she wonders if she is going mad after learning she was in a lay-by at the same time as a local woman who was murdered there. Suddenly her world is turned upside down and paranoia takes over.

This is such an atmospheric, clever and claustrophobic novel. When reading it in bed at night I was genuinely freaked out and I found the whole thing terrifying at times. The Breakdown is such a clever title as it has more than one meaning within the context of the story. Just as terrifying as anything else is the way that Cass is forgetting things like how to do the most basic of tasks. Her confusion and fear is put across perfectly to the reader.

When the big reveals came my heart was racing. It wasn’t so much that it was a huge surprise, more that there was such a sense of menace about the whole book that I was feeling quite anxious as I hurtled towards the conclusion.

I don’t know how B A Paris does it but she manages to create these page turners that keep me reading long after I should have put it down and gone to sleep. The Breakdown is highly recommended by me and is right up there with the best of the psychological thrillers.

Thank you to the publishers and Netgalley for the review copy.  The Breakdown was published today by HQStories.