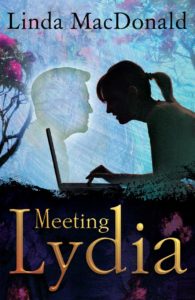 I’m so pleased to be reviewing Meeting Lydia by Linda MacDonald today, as part of the book tour organised by Anne Cater of Random Things Tours. I’d like to thank Anne for the spot on the tour and the author for providing a review copy of the book via Netgalley.

Meeting Lydia explores the very relevant topics of childhood bullying, midlife crises, the pros and cons of internet relationships, and how the psychological effects of these affect the main character and those around her. Readers will be gripped by the turbulent life of Marianne who navigates the onset of menopause, an empty nest, a suspected errant husband and a demanding new obsession that pulls her in deeper as the story unfolds. Those interested in the psychology of relationships will enjoy this novel, as well as those who delight in an enthralling story with relatable characters and the powerful question of what happens when the past catches up with the present. This second edition has reworked the early chapters of the first edition, making for a pacy and shorter version more in line with the audiobook.

Marianne comes home from work one day to find her husband talking to a glamorous woman in their kitchen. Old childhood insecurities resurface, stemming from a time back at school when she was bullied. Jealousy rears its head and her happy marriage begins to crumble. Desperate for a solution – and introduced by her daughter to social networking – she tries to track down her first schoolgirl crush, the enigmatic Edward Harvey. But Marianne is unprepared for the power of email relationships …

You can get Meeting Lydia now from Amazon.

Meeting Lydia is the first in a set of four books that feature some of the same characters but are standalone reads. I have read book four, The Man in the Needlecord Jacket, which I thought was a fantastic read so I was keen to read another by this author.

I’d been wondering who Lydia was as she didn’t seem to be mentioned in the blurb. It all becomes clear in the story which is about Marianne primarily. She’s menopausal and when her husband, Johnny, brings home his attractive younger colleague, she’s incensed by it. It brings back her school years when she was bullied as one of only a handful of girls in a boarding school for boys. It drives her to Friends Reunited (the book is set in 2002 and at the time that site was the cutting edge of social media) to look up an old school mate, Edward, and they begin an email correspondence in which Marianne pours out all her feelings.

This book looks at how events of the past are always there, waiting to rear their, sometimes ugly, head. Marianne is deeply damaged by the bullying but had pushed it into a recess of her mind. Edward is someone who might understand, might remember, a kindred spirit, as he was there at the time.

There’s quite a lot of philosophical thoughts in this book, particularly in Marianne’s emails to Edward. Not surprising, given that she is a psychology lecturer (and the author was too). Philosophical thoughts aren’t quite my bag but they represented Marianne’s look deep within her psyche, examining her inner feelings and fears.

It was nice to read something about Friends Reunited as that site had a massive impact on people. For the first time, it was possible to look people up on the internet and connect with them again. I also enjoyed the themes involved in this story, being ones of jealousy, insecurity, the change of life. Linda Macdonald is most definitely an accomplished writer of stories about feelings. She’s able to look deep into the heart of her characters.

I really enjoyed Meeting Lydia and am looking forward to catching up with the characters from different perspectives in the two books that I have not yet read. This is intelligent fiction about a woman at a crossroads in her life, trying to work out whether to stick on the road she has travelled so far or to take a different path. Linda MacDonald is the author of four novels: Meeting Lydia and the stand-alone sequels, A Meeting of a Different Kind, The Alone Alternative and The Man in the Needlecord Jacket. All Linda’s books are contemporary adult fiction, multi-themed, but with a focus on relationship issues.

After studying psychology at Goldsmiths’, Linda trained as a secondary science and biology teacher. She taught these subjects for several years before moving to a sixth-form college to teach psychology. The first two novels took ten years in writing and publishing, using snatched moments in the evenings, weekends and holidays. In 2012, she gave up teaching to focus fully on writing.

Linda was born and brought up in Cockermouth, Cumbria and now lives in Beckenham in Kent.