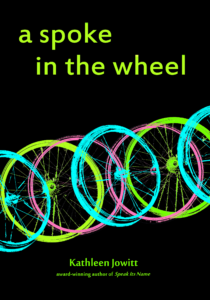 I’m delighted to be taking part in the blog tour today for A Spoke in the Wheel by Kathleen Jowitt. Isn’t it a lovely, eye-catching cover? I’m reviewing the book and I also have a guest post from Kathleen about genres in writing. But first, let’s have a look at what the book is about:

The first thing I saw was the wheelchair.

The first thing she saw was the doper.

Ben Goddard is an embarrassment – as a cyclist, as an athlete, as a human being. And he knows it.

Now that he’s been exposed by a positive drugs test, his race wins and his work with disabled children mean nothing. He quits professional cycling in a hurry, sticks a pin in a map, and sets out to build a new life in a town where nobody knows who he is or what he’s done.

But when the first person he meets turns out to be a cycling fan, he finds out that it’s not going to be quite as easy as that.

Besides, Polly’s not just a cycling fan, she’s a former medical student with a chronic illness and strong opinions. Particularly when it comes to Ben Goddard…

Lulu or this link instead.

I must admit that what drew me to this book in the first place was the cycling element. Don’t get me wrong, I’m not a fan of watching cycling and I certainly never do any, but I find it an interesting sport when fictionalised. In fact, there isn’t that much actual cycling going on in this book, but it’s an excellent read about redemption and friendship.

Ben Goddard is an ex-cyclist but he took performance enhancing drugs and got thrown out of his team and the sport. He could go back in a year but he doesn’t really want to. He makes a new start in a new town where he thinks he won’t be recognised but pretty much straightaway two women, Vicki and Polly, do recognise him. They’re best friends and live together. Polly is in a wheelchair after a serious illness, she’s quite prickly and Ben has a hard job trying to cope with her disapproval as he becomes friends with the two women.

I liked Ben immensely. The book is told in the first person by him and it worked really well. I liked his self-deprecating personality and the way he just got on with his life after his disgrace instead of wallowing in self-pity. In fact, I liked all the major characters in this book. I think they would all be great friends to have.

I thought it was a really lovely story with a warm tone to the writing. I found myself caring about what happened to Ben, Polly and co and I have to say that I couldn’t have wished for a better conclusion. It’s more of a slice of life story than one with a beginning and an end and I felt rather lucky to have witnessed these particular slices of life with them all. All in all, a really enjoyable and heart-warming read.

I’ve never been able to pick a genre and stick with it. Sometimes I think the whole concept of genre is more trouble than it’s worth. I deleted the column from my iTunes library rather than try to explain to it the difference between the Brandenberg Concertos and Carmen, both of which it tried to file under ‘Classical’. It doesn’t stop me listening to either of them. Similarly, I read all sorts of books, everything from stage stories to spy thrillers, and I particularly enjoy ones that escape the boundaries of their own genre. Ankaret Wells’ sci-fi romances are a good example; so are Heather Rose Jones’ historical swashbucklers with a hint of fantasy; and then there are the characters from John Buchan’s thrillers who wander into his ghost stories.

I suppose it’s hardly surprising that I’ve ended up writing things that cross over genre boundaries, too.

I often describe my first novel, Speak Its Name, as ‘University of Barchester’. It’s a university book – but it’s mostly concerned with church politics. But nobody’s ordained, so it doesn’t quite fit in with Anthony Trollope, or more modern exponents of the Barchester genre like Catherine Fox or Susan Howatch. Somebody called it ‘Pony Club’ the other day, which I thought was a bit of a stretch, but I have to admit that it’s definitely got some school story in its antecedents. The focus is on a group of people of about the same age in a limited space, almost all the important action happens during term time, and we see a little of the protagonist’s family but hardly anything of anyone else’s. Only it has rather more swearing than Malory Towers.

It’s the same with A Spoke in the Wheel. On one level, it’s a ‘boy meets girl, girl isn’t impressed with boy’, will-they-or-won’t-they, plot. On another, it’s a sporting fall and redemption story. Or you could call it a slightly delayed coming-of-age. A kitchen sink drama. It refuses to sit neatly in any particular genre. What is it definitely about? Cycling. There aren’t enough books about cycling for it to get its own genre – not fiction, anyway. Off the top of my head, I can think of Tim Krabbé’s The Rider and Freya North’s Cat. More people should write cycling fiction. I’d read it.

Maybe it would be easier to describe the genres it isn’t… No magic? No. So it’s not fantasy. Technology? There are a few nice carbon bike parts, but there’s nothing from the future. Not sci-fi. Nobody gets murdered, so it’s not a mystery.

Let’s start again. I’ve written a novel about a disgraced professional cyclist and a disabled cycling fan. They have more in common than either of them wants to admit – most of all, that they’re both trying to live a normal life, and they both think it might be easier if they didn’t have to deal with the other one.

You know what? I think I’ll just file it under ‘Fiction – General’.

Thanks so much, Kathleen. I think Fiction-General is the perfect genre for A Spoke in the Wheel. Kathleen Jowitt was born in Winchester, UK, and grew up deep in the Welsh Marches and, subsequently, on the Isle of Wight. After completing her undergraduate degree in English Literature at the University of Exeter she moved to Guildford and found herself working for a major trade union. She now lives in Cambridge, works in London, and writes on the train.

Her first novel, Speak Its Name, was the first self-published book ever to be shortlisted for the Betty Trask Prize.