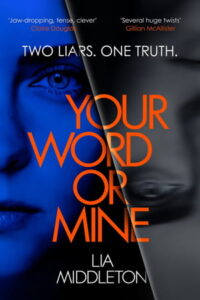 ShortBookandScribes #PublicationDay #BookReview – Your Word or Mine by Lia Middleton

Posted on 1st September 2022 By Nicola

Your Word or Mine by Lia Middleton is published today by Michael Joseph in paperback, eBook and audiobook. My thanks to Ella Watkins for sending me a proof copy for review.

It should be an open-and-shut case. But Ava suspects something everyone else does not:
MICHAEL OSBORNE IS LYING.

Because eighteen years ago, Ava was brutally assaulted. The case went to trial. Her attacker was acquitted.

Now, court is in session.

And Ava must decide how far she’s willing to go to uncover the truth . . . Your Word or Mine drew me to it initially because of the courtroom aspects. I love a courtroom drama. Ava Knight is a prosecuting barrister who, in the course of her work, is required to defend a young girl accused of stabbing a man. It all seems quite cut and dried until Ava realises the victim is the man who attacked her 18 years previously. This is what leads Ava to risk everything, to act out of character, to pursue the truth.

This is a book that I found gripping from beginning to end. Lia Middleton’s plotting is impeccable and I particularly liked the fact that the twists in the story were totally plausible and it never felt as though the story was being manipulated just to create shock value. However, I have to say that shock value was very much created. The end of the first half drew a gasp from me and there were at least two other moments when I said “oh no” to myself out loud and had to turn away from the book for a moment. It’s such a tense ride; indeed all emotions came into play: anger, sympathy, nail-biting anxiety and even a tear in my eye.

This is one fast-paced and gripping ‘edge of the seat’ kind of story. As Ava looks for answers, both to what happened to her all those years ago, and what is happening now, she puts herself in some rather stressful situations and it makes for an extremely taut and exciting experience. An intelligent crime thriller that comes highly recommended by me. I couldn’t put it down.

Lia Middleton is a barrister who specialises in crime and prison law, and lives with her husband and two young children in Buckinghamshire. You can find her on Twitter @liamiddlet0n and on Instagram @liamiddletonauthor. When They Find Her was her first novel.