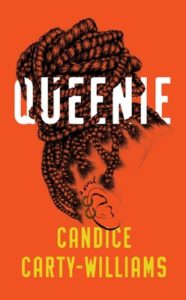 I’m so pleased to be reviewing Queenie by Candice Carty-Williams today as it’s publication day! Congratulations, Candice! My thanks to the publishers, Trapeze, for the review copy via Amazon Vine.

Queenie Jenkins can’t cut a break. Well, apart from the one from her long term boyfriend, Tom. That’s definitely just a break though. Definitely not a break up. Then there’s her boss who doesn’t seem to see her and her Caribbean family who don’t seem to listen (if it’s not Jesus or water rates, they’re not interested). She’s trying to fit in two worlds that don’t really understand her. It’s no wonder she’s struggling.

A darkly comic and bitingly subversive take on life, love, race and family, QUEENIE will have you nodding in recognition, crying in solidarity, and rooting for this unforgettable character every step of the way.

Queenie is a book I kept seeing mentioned on Twitter. It has a fabulous cover and captured my attention straightaway with the idea of the eponymous Queenie, but I honestly didn’t take much notice of the blurb and so I wasn’t entirely sure what to expect when I started reading. I made a special little place in my schedule for Queenie and when I embarked on her story I fervently hoped that I would be pleased I had done so. Was I going to like this story of a quite prickly young woman? Well, I can tell you quite categorically that the answer is yes. I loved it!

I think the reason the blurb didn’t quite stick in my mind as such is because Queenie is a slice of life story. It doesn’t have a major plot, it’s more a case of the reader looking on at a snapshot of a time when Queenie is 25, about to turn 26. She’s on a break from her boyfriend of three years, Tom, (it’s definitely a break, not the end, she’s sure) and she goes on something of a collision course. She allows herself to be used by other men, she spends all her time at work talking with Darcy, her friend, instead of getting on with what she’s supposed to be doing. Frankly, her life starts to become a bit of a mess.

Two things really stand out about this book for me. One is the treatment of Queenie as a black woman. I was agape at the way people would talk to her and treat her in the derogatory way that they did. I’m sure that Candice Carty-Williams is writing from experience or knowledge or both, and either way, it’s truly shocking.

Which brings me round to the second thing that stands out: Queenie’s self-esteem, or lack of. A difficult childhood and the way she has been treated have really knocked her confidence and she doesn’t think she’s worth very much. I really wanted to reach into the book and tell her that she absolutely is a queen in every way. She’s sassy, she’s outspoken and she’s just a wondrous, glorious woman.

Her group of friends try to keep her on the straight and narrow and I thought they were a great group (for the most part). They often made me smile, in fact this is a story that made me smile a lot. It’s about getting knocked down, getting back up again, and rising above where others want to put you.

Then there’s her family. Queenie is British but her family are from the Caribbean. Her grandfather is obsessed with his water meter and her grandmother believes that they should never ask for, or accept, help. I really enjoyed reading these sections as they offered a cultural backdrop to Queenie’s life. Part of her longs for the Jamaican landmarks of Brixton which are disappearing in favour of generic burger bars and the like. They remind her of good times in her childhood, but at the same time she has to deal with trying to fit in as a second generation Londoner and in part this means leaving behind some of her cultural roots, casting her adrift from her family.

Queenie is an amusing story but one which also made me think, and made me hope that Queenie would come out the other end stronger and wiser. It’s a beautifully written debut and I think Queenie is going to go far.

Candice Carty-Williams is a marketer, author and journalist based in London. Born in 1989, the result of an affair between a Jamaican cab driver and a Jamaican-Indian dyslexic receptionist, Candice worked in the media before moving into publishing aged 23. In 2016, Candice created and launched the Guardian and 4th Estate BAME Short Story Prize, is a Penguin Books Write Now mentor, and she also contributes regularly to Refinery29, BEAT Magazine, Guardian Guide and i-D. QUEENIE is her first novel.