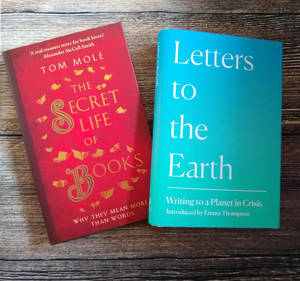 ShortBookandScribes Mini #BookReviews – The Secret Life of Books by Tom Mole | Letters to the Earth: Writing to a Planet in Crisis by Jackie Morris and Emma Thompson #nonfiction

Posted on 6th December 2019 By Nicola

Today I’m doing mini reviews of two non-fiction books: The Secret Life of Books and Letters to the Earth: Writing to a Planet in Crisis. If I’d have got my act together I might have posted them as part of #nonfictionnovember but I didn’t. My thanks to Elliott & Thompson, Alison Menzies and William Collins for the lovely copies of the books sent to me for review purposes.

THE SECRET LIFE OF BOOKS

This is a gorgeous book about books. The cover is a stunner in a deep red with books floating around like something out of Harry Potter. There are eight chapters looking at, for instance, ‘the things we do to books and the things they do to us’, or perhaps ‘How books shape institutions, societies and nations’.

Tom Mole is a Professor of English Literature and Book History so he’s well qualified to talk about books and their effect on us and the world around us. It’s a fascinating subject and such an interesting book. I do admit that non-fiction isn’t a genre I get on too well with but this is an easy read about subjects that fascinate me as a book lover. I particularly enjoyed the bit that looked at how we leave traces of ourselves on our books (well some people do but actually mine are pristine when I finish reading them).

With Christmas fast approaching this book would make a lovely gift for a book lover.

Tom Mole is Professor of English Literature and Book History at the University of Edinburgh, where he runs the Centre for the History of the Book. He has taught at universities in the UK and Canada, and has lectured widely in Europe, Australia and North America. He is a Fellow of the Royal Historical Society. He has written or edited several volumes about books and literature, including What the Victorians Made of Romanticism, which won the 2018 Saltire Prize for Research Book of the Year. He lives in Edinburgh with his wife and young daughter.

LETTERS TO THE EARTH: WRITING TO A PLANET IN CRISIS

How can we begin to talk about what is happening to the world? We are facing a global emergency. Temperatures are rising. Mass species extinction has begun. The time for denial is over. It is time to act.

Letters to the Earth is the beginning of a new story. It is an invitation to act and an opportunity to extend the invitation.

These letters are the result of a callout from Culture Declares Emergency to the public to write a response to climate and ecological emergency. They are letters from all of us: parents and children; politicians and poets; actors and activists; songwriters and scientists. They are letters of Love, Loss Hope and Action to a planet in crisis.

Letters to the Earth is a number of letters from people, some prominent, some not, writing to a planet that is in crisis from climate change. Emma Thompson has written the introduction. I particularly enjoyed the first letter by Richard Holloway entitled ‘To the Author of Genesis’ but there are many interesting and erudite letters in this volume.

There are five sections entitled Love, Loss, Emergence, Hope and Action and there are one hundred letters to read in total. I think this is a book that benefits dipping in and out of rather than sitting and reading in one go but that of course is up to the reader.

There’s a lovely variety of letters from a lovely variety of people, both young and old, male and female, well known and not, adults and children. It’s really a love letter to earth and a plea for change and action. It’s an engaging read for non-fiction fans.

In February 2019 four women came together and dreamt of an opportunity for people to express themselves in response to this crisis. What was born was Letters To The Earth, a campaign which invites people to write a letter to or from the Earth, future or past generations, those who hold positions of power and influence, other species. The idea was open to interpretation: it could come from a personal place, be dramatic in form, be a call to action. The invitation was open to all – to think beyond the human narrative and to bear witness to the scale and horror of this crisis. The campaign is ongoing, with people all around the world still writing and presenting their Letters.