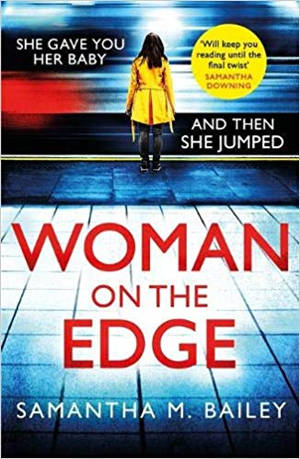 Posted on 4th December 2019 By Nicola

Welcome to my stop on the blog tour for Woman on the Edge by Samantha M. Bailey. My thanks to Anne Cater from Random Things Tours for the place on the tour and to Rosie Margesson from Headline for the proof copy of the book for review purposes.

A moment on the platform changes two lives for ever. But nothing is as it seems…

In a split second, Morgan’s life changes for ever. A stranger hands her a baby, then jumps in front of a train.

Morgan has never seen the woman before and she can’t understand what would cause a person to give away her child and take her own life.

When the police question Morgan, she discovers none of the witnesses can corroborate her version of events. And when they learn Morgan longs for a baby of her own, she becomes a suspect.

To prove her innocence, Morgan frantically tries to retrace the last days of the woman’s life. She begins to understand that Nicole Markham believed she and her baby were in danger. Now Morgan might be in danger, too.

Was Nicole a new mother struggling with paranoia?

Or is something much darker going on?

Pulse-pounding, heartrending, shocking, thrilling. This is a thriller you won’t stop thinking about.

What an intriguing tagline this book has. What would possess a woman to give a baby to a stranger on a train platform and then jump in front of a train. That’s what Morgan Kincaid finds herself wondering after Nicole Markham does that exact thing.

Morgan is a woman who is recovering after a traumatic time. She’s lost her husband but more than that, she’s dealing with the mess he left behind. When she’s given the baby she is taken aback but she’s also always wanted a child of her own and so for a split second she revels in the possibilities.

There’s more to all this than meets the eye. What is the link between Morgan and Nicole? Morgan can’t think of any link at all. She sets to trying to find out more, especially when she finds herself suspected of pushing Nicole in front of the train.

This is a relatively short book at 288 pages but it’s got a lot packed into it. We see Nicole before the incident and Morgan afterwards in alternating chapters which really help to bring the threads together. I really liked how Morgan’s findings tied in with the lead up to Nicole’s death.

Woman on the Edge is a story that is fast-paced and full of tension. I did see the outcome from a mile off but I still enjoyed getting there and seeing if I was correct. Thinking back, I’m not sure the reason for what happened was quite as fully explained as I would have expected though. I did enjoy this book a lot. I found it quite gripping and sad really, about two women dealing with serious issues not exactly of their making. Samantha M. Bailey is a Toronto-based journalist who has written extensively for Now Magazine, Oxford University Press, and many other publications. She is the co-founder of ‘BookBuzz’, a promotional and interactive author event held in New York City and Toronto that has attracted the attention of prominent publicists, influential media, and bestselling authors. WOMAN ON THE EDGE is her debut novel.