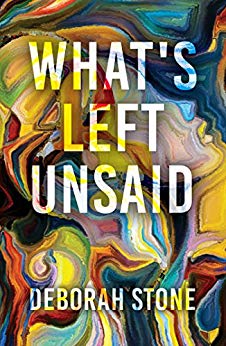 I’m so pleased to be able to share my thoughts about What’s Left Unsaid by Deborah Stone with you today. My thanks to the author for sending me a copy of her book for review purposes.

Sasha is just about managing to hold her life together. She is raising her teenage son Zac, coping with an absent husband and caring for her ageing, temperamental and alcoholic mother, as well as holding down her own job. But when Zac begins to suspect that he has a secret sibling, Sasha realises that she must relive the events of a devastating night which she has done her best to forget for the past nineteen years.

Sasha’s mother, Annie, is old and finds it difficult to distinguish between past and present and between truth and lies. As Annie sinks deeper back into her past, she revisits the key events in her life which have shaped her emotionally. Through it all, she remains convinced that her dead husband Joe is watching and waiting for her. But there’s one thing she never told him, and as painful as it is for her to admit the truth, Annie is determined to go to Joe with a guilt-free conscience.

As the plot unfurls, traumas are revealed and lies uncovered, revealing long-buried secrets which are at the root of Annie and Sasha’s fractious relationship. What’s Left Unsaid is a story of a family in all its glorious complexities.

Sasha is a freelance copywriter, wife to Jeremy and mother to teenager, Zac. Sounds fairly standard but Jeremy is never there, he’s a successful lawyer always working away. Sasha’s relationship with Zac is a little fraught, as parent/teenager relationships often are. And then there’s her mother, Annie, a bitter woman, full of ill feeling, wine and forgetfulness. Sasha’s life is far from satisfactory but she carries on, in a kind of befuddled way, putting up rather stoically with her mother’s unpleasantness towards her.

The first part of the story is told from the viewpoints of Sasha and Annie with short contributions from Joe, Sasha’s late father. I wasn’t at all sure about his parts at first but as the story progressed I thought it was an interesting way of unfolding the family story and the more I read the more I liked his input. Joe comes at it from an onlooker’s stance, seeing the difficulties in Sasha and Annie’s relationship and filling in the blanks for the reader. The second section brings forward Joe’s life story and gives more background to how he and Annie met, his successful career on TV and his love for Sasha. The third part reverts back to Sasha and Annie and brings about the conclusion to both of their stories.

When I started reading What’s Left Unsaid, I was a little unsure as to exactly what the story was going to be about. Once I finished it and looked back I could see it was a story of family dynamics, of how what we experience in childhood can affect our whole lives. Whilst Annie and Sasha had completely different upbringings, they both suffered. Annie’s experiences during the war changed her forever and impacted on her ability to be a good mother. This in turn led to Sasha having a very difficult relationship with her mother, never feeling loved or valued by her, and consequently being a bit of a sap.

Both women have a secret and whilst it was not exactly a huge surprise when they were revealed, it was done sympathetically and I liked the way that it explained so much about their behaviour over the years. I liked Sasha and didn’t like Annie at all, but I think Annie was by far the more interesting of the two women. Her acerbic manner and her increasing inability to remember make her a very interesting character and then when her back story unfolded it just added to the intrigue. I was so interested to read that the author had used her own parents’ wartime experiences as inspiration.

This is a book that has so much that I enjoy: family ups and downs, social history, secrets and lies. It’s very much a character led story and those characters fascinated me. I found it to be a well-written and thoughtful debut novel, a slice of life story and  a family history combined.

Deborah Stone lives in North London with her husband, two sons and fabulous golden retriever, George, who is the inspiration for Stanley in the novel. This is her debut novel.

What’s Left Unsaid  spans several decades, telling the history of the Stein family from the turn of the twentieth century to the present day. Speaking of her inspiration for her novel, Deborah says; ‘My own mother was evacuated at the age of five during World War Two and my father was a young man working as an ARP warden. This novel is purely fictitious, but I wanted to explore the traumas that many ordinary people of the war generation suffered, experiences which would be quite unimaginable to many of us today and then to contrast them with the issues we all face in the modern day.’