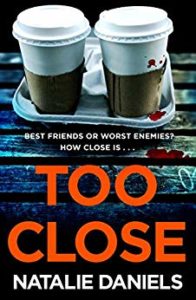 I’m delighted to be reviewing Too Close by Natalie Daniels today. What a great story! My thanks to Anne Cater for the place on the tour and the publishers for providing a review copy of the book.

For fans of THE GIRLFRIEND and THE WIFE BETWEEN US, TOO CLOSE is a twisting tale of friendship and betrayal.

How close is too close?

Connie and Ness met in the park while their children played. As they talked, they realised they were neighbours. Perhaps it was only natural that they and their families would become entirely inseparable.

But when Ness’s marriage ends in a bitter divorce, she is suddenly at Connie’s house all the time. Connie doesn’t have a moment to herself, no time alone with her husband, not a second to chat to her kids.

It’s all too much. Something has to give.

Connie has woken up in a psychiatric hospital. They say she committed a terrible crime but she says she can’t remember a thing.

The tagline for this book asks “how close is too close?”. Sometimes there are those friendships that completely implode because boundaries have been crossed and the people involved are, yes, too close

Connie meets Ness one day when their children are playing in the park and from that day they are the best of friends. Their partners and children also become part of the friendship. But then things change for Ness and suddenly it impacts on Connie’s own life, with disastrous consequences.

Early in the story we know that Connie is in a psychiatric hospital and she’s being visited by a psychiatrist – Dr Emma Robinson – but we don’t know what has led to her being there. That story unfolds throughout the course of the entire book.

From the get-go I loved Connie. She has an acerbic way about her, she’s dry, she’s sharp, she’s clever. Even in her current situation she’s lost none of that but she has lost so much. Emma tries to get to the bottom of it but in talking with Connie she is forced to reassess her own life too.

Emma is a very likeable character. Flawed and with problems of her own (one of which was a hand over the mouth moment for me), I was glad that Connie had her on her side, especially as I learnt more about what had happened to her.

Too Close is a fabulous psychological thriller. It’s most definitely about the way the mind can be affected by certain trigger events and what the consequences of that might be.

There’s a complete honesty from the characters and in the writing. Connie in particular is very astute and there were many times I found myself nodding along thinking that what she was saying or thinking was absolutely spot on. She has a habit of saying exactly what she’s thinking, with no filters, and I found it rather refreshing and quite amusing.

It’s hard to believe this is a debut novel. It’s assured, it’s intelligent and there is some very skilful plotting. I thought it was a fab and compulsive read. Natalie Daniels is the pseudonym for screenwriter, author and actress Clara Salaman who you may recognise as DS Claire Stanton from The Bill. She lives in London and in Northern Spain