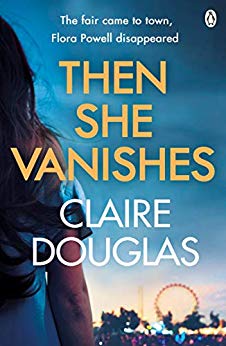 Welcome to my stop on the blog tour for Then She Vanishes by Claire Douglas. This is a fab read! My review is below. My thanks to Sriya Varadharajan from Penguin for the place on the tour and for sending a proof copy of the book for review purposes.

I’ve been meaning to read another of Claire Douglas’s books since I read Local Girl Missing back in 2016. Unfortunately, it’s taken me a while but I really enjoyed Then She Vanishes.

There are three women at the centre of the story. Flora went missing in 1994, never to be heard of again. Nobody knows what happened to her but it’s assumed she must be dead. In 2012, her sister, Heather, finds herself accused of murdering two people and then turning the gun on herself. And then there’s Jess, who was Heather’s best friend when Flora went missing and who is now a journalist investigating the double murder.

I loved how this book was plotted. We see events from the points of view of Jess, Margot, who is the mother of the sisters, and then an unnamed person. Jess is a fascinating character, banished from her job on a big London paper, now working in Bristol on a bi-weekly paper. As the story progresses we start to uncover the reasons for her move back to her home area, which is what brings her into contact with Margot again, a woman who was almost a surrogate mother to her during that earlier fateful time.

What’s really strong in Then She Vanishes is the way the author keeps so much under wraps until just the right time to drop it on the reader. I had no idea for most of the book why Heather might have done what she did and then when it all came together it made perfect sense. I thought it was really clever that there were no real clues and yet it all fitted together so well.

This is a fabulous psychological thriller, a really gripping read. I found it a very easy book to race through and such an engaging story. Hopefully I won’t leave it so long before I read another of this author’s books. Claire Douglas always wanted to write novels and, after many years of trying to get published, her dream came true when she won the Marie Claire Debut Novel Award in 2013 with THE SISTERS.

Her subsequent novels LOCAL GIRL MISSING, LAST SEEN ALIVE and DO NOT DISTURB all reached the Sunday Times top ten bestsellers list and are published in over fifteen countries. LOCAL GIRL MISSING was the bestselling crime debut of 2018 in Germany. Her fifth thriller, THEN SHE VANISHES was released in Ebook at the end of June 2019 and in paperback in August 2019.