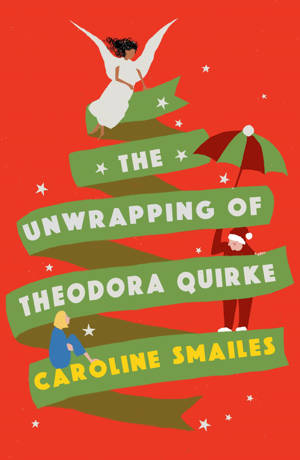 Posted on 5th November 2020 By Nicola

It’s my stop on the blog tour for The Unwrapping of Theodora Quirke by Caroline Smailes and I’m delighted to be reviewing this fabulous read today. My thanks to Lizzie Lewis of RedDoor Press for the place on the tour and the proof copy of the book. Thanks also to the author for the homemade badges!

‘SAVE THEO, SPITFIRE AND ORAL’

Theodora Quirke has no reason to be merry. It’s bad enough that she has to work on Christmas Eve but now there’s a drunk bloke dressed as Santa and claiming to be St Nick hanging around outside her flat. Given he’s professing to be the giver of Christmas miracles and nearly 2000 years old, she’s wary.

Things get even more weird when St Nick insists he’s there to save Theo. And with the next St Nicholas Day somehow fast approaching, he’s even got a plan that’ll change her life forever.

It all seems pretty straightforward, apart for one awkward fact: Having read Caroline Smailes’ work before, I knew not to expect a typical fluffy Christmas story when I started The Unwrapping of Theodora Quirke. What this is is a quirky (no pun intended) yet heart-warming story of a young woman who has lost everything she loves and who finds a way to live again.

Theo is 19 and already has suffered so much loss and upheaval in her life so when St Nick turns up on her doorstep she’s understandably sceptical. Here’s where it gets unusual, a little bit bonkers, and really rather lovely. St Nick is out to save her and even if she doesn’t think she needs it, the journey ahead is destined to change her life.

I loved the way Smailes brought Theo and St Nick to life in such a glorious fashion. The book is set in Liverpool and there’s a very down to earth feel about it that is characteristic of that city. It’s also full of dry humour which had me smiling a lot. St Nick is quite a character and the descriptions of what he was wearing (or not, as was often the case) and his dubious cleanliness was fantastic and so funny.

I don’t know how the author came up with such an original idea for a story but coupled with her trademark brilliant and sweary voice it makes for a winning combination.

This is a great book for this time of year as Christmas approaches, and if you like something that isn’t saccharine but is still a feel-good story then look no further. It was an absolute pleasure to spend a couple of days in the company of Theo and St Nick in a world of miracles, the unexpected, friendship, loss and love. Caroline Smailes’ acclaimed debut novel, In Search of Adam, was published in 2007 (The Friday Project/HarperCollins). The Big Issue North declared the book ‘an engrossing and touching read from a new talent’. Since then Caroline has written six additional novels. These include Black Boxes, international bestseller Like Bees To Honey, an experimental digital novel with eleven endings 99 Reasons Why and modern day fairy tale The Drowning of Arthur Braxton (all HarperCollins).

The feature film of The Drowning of Arthur Braxton is in post-production, with an expected winter 2020/21 release.

As well as novel writing, Caroline has co-authored a short story collection (Freaks!), written scripts for short films and the script for a musical (The Colour of Light debuted in March 2020, selling out its two performances).

Caroline lives in Liverpool and is also known as Caroline Wallace (The Finding of Martha Lost). She is head of book editing at BubbleCow and is currently the Royal Literary Fund Fellow at Liverpool University.