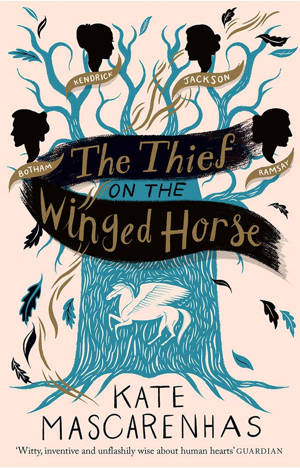 It’s my stop on the blog tour for The Thief on the Winged Horse by Kate Mascarenhas. I’ll be sharing my thoughts about the book today. My thanks to Vicky Joss and Amber Choudhary for the place on the tour and the proof copy of the book for review purposes.

A dazzling mixture of crime, romance, magic and myth from the author of the bestselling The Psychology of Time Travel.

The Kendrick family have been making world-famous dolls for over 200 years. But their dolls aren’t coveted for the craftsmanship alone. Each one has a specific emotion laid on it by its creator. A magic that can make you feel bucolic bliss or consuming paranoia at a single touch. Though founded by sisters, now only men may know the secrets of the workshop.

Persephone Kendrick longs to break tradition and learn her ancestors’ craft, and when a handsome stranger arrives claiming doll-making talent and blood ties to the family, she sees a chance to grasp all she desires.

But then, one night, the firm’s most valuable doll is stolen. Only someone with knowledge of magic could have taken her. Only a Kendrick could have committed this crime… I loved Kate Mascarenhas’ first book, The Psychology of Time Travel, so I was keen to read her second offering, The Thief on the Winged Horse.

Four sisters founded Kendricks Workshop in 1820 on a river island called Paxton’s Eyot and their descendants have run it ever since. The family business is making dolls that are enchanted, an emotion laid upon them by the creator such as Self-Righteous Outrage or Heady Optimism. I was really quite fascinated by the idea of these dolls and how the emotions were laid.

Persephone Kendrick is the main character, although there are many others who play a huge role in the story. I think, though, that the author wanted us to like Persephone and I did. Women are not encouraged to be sorcerers but that is what Persephone wants more than anything and I admired her drive to get where she wanted to be. As with her first book, Mascarenhas is championing strong women and making sure that those characters are at the forefront of the action, despite the patriarchal environment. A much treasured stolen doll forms much of the storyline but it’s also just as much about the running of the family business and the hierarchy within it.

What I found intriguing was the way the author put this world firmly in the real life setting of Oxford, thereby giving that juxtaposition between reality and fantasy. It meant that for readers such as myself who cannot fully immerse themselves in a fantasy world, it was more accessible. However, it did sometimes feel a bit strange in that it felt like life on the eyot belonged many years ago and yet the story is quite obviously set very firmly in the current day.

The Thief on the Winged Horse is an original and unusual book and whilst it was a step out of my comfort zone I do think the author has created something so intriguing. Kate Mascarenhas is a part-Irish, part-Seychellois midlander. Since 2017, Kate has been a chartered psychologist. Before that she worked as a copywriter, a dolls’ house maker, and a bookbinder. She lives with her husband in a small terraced house which she is slowly filling with Sindy dolls. Her first novel, The Psychology of Time Travel was published in 2018 to wide acclaim.