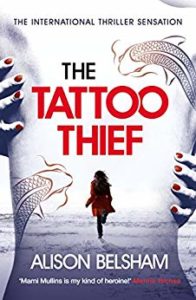 I’m so pleased to be sharing my review of The Tattoo Thief by Alison Belsham. My thanks to Tracy Fenton for the place on the tour and Orion for the review copy.

When Brighton tattoo artist Marni Mullins discovers a flayed body, newly-promoted DI Francis Sullivan needs her help. There’s a serial killer at large, slicing tattoos from his victims’ bodies while they’re still alive. Marni knows the tattooing world like the back of her hand, but has her own reasons to distrust the police. So when she identifies the killer’s next target, will she tell Sullivan or go after the Tattoo Thief alone?

I’ve been reading some cracking crime thrillers lately and The Tattoo Thief most definitely fits into that category. Personally, I’m not a fan of tattoos and so I wasn’t at all sure the storyline being predominantly about them would suit me but oh my goodness, it absolutely did.

Marni Mullins is a tattoo artist in Brighton. One evening she stumbles across a dead body, one that she later learns has had a tattoo flayed from his body. In reporting the body she couldn’t imagine how involved she would later become in the case. The policeman in charge is newly promoted DI Francis Sullivan, a relatively wet behind the ears young man, but with a core of steel and the strength to stand by his convictions.

There are four voices that we hear from in this book: Marni, Francis, Rory – a DS who believes he should have got Francis’s job, and the killer – the one who is dubbed “The Tattoo Thief”. I really liked this way of telling the story and seeing it from different viewpoints. The killer’s voice in particular is chilling.

I loved Francis and I was over the moon to read that he will be in Alison Belsham’s next book as I think he has great potential. He was determined not to let police politics get in the way of finding the killer and I admired him a lot. I really felt for him trying to take charge without the respect of his colleagues. Rory was a bit of a pain for much of the story but I think he redeemed himself later on.

I also liked Marni very much. She’s feisty and strong and a talented tattooist. I found the tattoo world really fascinating, the way that all the artists had distinctive styles and the different designs. I would quite like to have seen pictures of similar designs to the ones in the book, but actually the descriptions were enough that I could imagine them quite well.

I found this book to be completely absorbing. It’s such an intriguing and original storyline. It’s quite dark in nature, and graphic, but it’s not really that gory. The characters are brilliant too. Also a word for the plot – when it all seemed to be coming to a conclusion rather earlier than I expected, a curveball was thrown right at me and the second stage of the conclusion was entered. Very clever work by the author.

This is the first in a planned trilogy of books to feature Francis, Rory and Marni and I really can’t wait to return to Brighton and meet them again. The Tattoo Thief is a debut but you wouldn’t know it. It’s an assured and fabulous read. Alison Belsham initially started writing with the ambition of becoming a screenwriter-and in 2000 was commended for her visual storytelling in the Orange Prize for Screenwriting. In 2001 she was shortlisted in a BBC Drama Writer competition. Life and children intervened but, switching to fiction, in 2009 her novel Domino was selected for the prestigious Adventures in Fiction mentoring scheme. In 2016 she pitched her first crime novel, The Tattoo Thief, at the Pitch Perfect event at the Bloody Scotland Crime Writing Festival and was judged the winner.