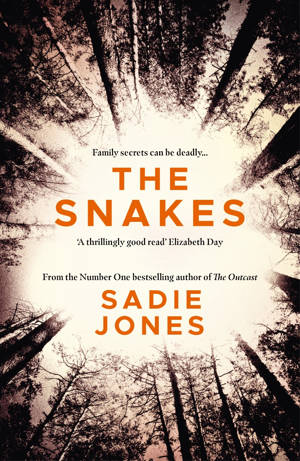 Welcome to my stop on the blog tour for The Snakes by Sadie Jones. You can find my review of this unsettling read further down this post. My thanks to Anne Cater for the place on the tour and to Vintage/Chatto Books and Midas PR for sending a copy of the book for review purposes. I’d heard quite a bit about The Snakes before I decided to read it, so much so that I was really intrigued to see what I thought of it myself.

It’s a fairly simple story on the face of it, but with so much going on underneath the surface, like a writhing ball of snakes I guess. Bea and Dan are living, not quite hand to mouth but not far off, in London. I loved the first chapter as they decide, quite rashly actually, to spend the summer travelling using their ‘Cushion’ of money. Their first stop is the hotel in France run by Bea’s chaotic brother, Alex. The short time the three of them spend together is pleasant enough but all that changes when their parents, Griff and Liv, arrive. Suddenly the atmosphere is tense and conflict abounds.

Having read another of this author’s books I was expecting challenging and often unpleasant characters. No surprises here then that there isn’t a single character who I could like in this book. Bea is probably the most likeable but even then I wouldn’t go so far as to say that I actually did like her. However, I don’t need to like the characters to enjoy a story and for the most part I found this an utterly fascinating look at family dynamics, how you cannot escape your past, and the effect of growing up around rich, domineering and powerful men. It’s a messed up story in many ways, uncomfortable to read at times, at others quite perplexing as to where the story was going. Ultimately I look upon The Snakes as a slice of life story, albeit rather a distressing slice of life, one which brings to a head matters that have been bubbling away for a while.

Sadie Jones is a talented writer. She is able to burrow down into the heart of feelings and yet does so in a matter of fact way. The ending shocked me. I knew it would as I’d heard other people say it, but I didn’t expect that! The book is full of a sense of foreboding and honestly, it’s left me feeling quite unsettled. It’s the sort of read I could spend ages thinking about what lies beneath the story of greed, wealth, jealousy and flawed family relationships. SADIE JONES is a screenwriter and a #1 Sunday Times bestselling author. Her first novel, The Outcast won the Costa First Novel Award and was shortlisted for the Orange Prize. It was also a Richard and Judy Summer Reads number one bestseller and adapted for BBC Television. Sadie also wrote: Small Wars (2009), The Uninvited Guests (2012) and Fallout (2014). Her fifth novel, The Snakes, was listed as ‘March book of the month’ in The Bookseller.