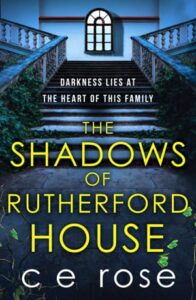 ShortBookandScribes #BookReview – The Shadows of Rutherford House by C.E. Rose

The Shadows of Rutherford House by C.E. Rose (aka Caroline England and Caro Land!) was published on 10th November by Hera Books in paperback and eBook.

Darkness lies at the heart of this family…

In 1959 Milly starts her new life as a housemaid at Rutherford House, working for the aristocratic Rutherford-Percy clan. Entranced by her new mistress, Vivienne, she becomes deeply embroiled in the household and the keeper of dark secrets the family conceals beneath the mansion’s grand exterior./p>

In the present day, Christie is working as a psychiatric nurse when she meets troubled patient Lillian Percy, Vivienne’s granddaughter and heiress to Rutherford House. They soon bond over the loss of their mothers – Lillian’s died when she was a child; Christie’s mysteriously disappeared over twenty years ago – and Christie finds herself increasingly fascinated by Lillian’s family and their imposing ancestral home.

As Christie learns more about the Rutherford-Percys, she finds a shocking clue that could help her uncover what happened to her own mother. Desperate for answers, Christie puts her job, her family and even her very life on the line. But how much of the truth does she really want to know?

A twisty, chilling and unputdownable page-turner about family secrets, perfect for fans of Kate Morton, Louise Douglas and Lucinda Riley. I was already intrigued by The Shadows of Rutherford House but when I learned it was set around South Yorkshire I decided I definitely had to read it.

Rutherford House is the seat of the Percy family, now quite run-down and faded. The story is told from the points of view of Milly, the maid who started working there in the late 1950s, Duncan, the son of the man who looks after the grounds in the 1980s, and Christie in the present day, a psychiatric nurse looking after Lillian, the granddaughter of the current Percy matriarch.

It’s my own fault, but in the early chapters I was busy and distracted and didn’t give the book as much attention as I should. The chapters are short and chop and change between the different characters quickly, something I love in a book, but my lack of concentration meant I struggled initially to gel with the different threads. However, once I’d got my act together and really got stuck into the Percy goings-on, I was totally engrossed. It’s a fantastic tale, with an intricate and expertly woven plot that links Christie with the other strands of the story, and I loved the setting of the faded grandeur of Rutherford House and the difficulties of looking after a large estate which grew more challenging as the years passed.

I really enjoyed The Shadows of Rutherford House. It starts as a slow burner and builds to a fiery crescendo, a drama based around three families with secrets and lies from the past echoing down through the generations. I’ll be checking out the other books by C.E. Rose.

CE Rose is the pen name of Caroline England, the author of psychological thrillers Beneath the Skin, My Husband’s Lies, Betray Her and Truth Games. As CE Rose, Caroline has written gothic-tinged domestic suspense novels, The House of Hidden Secrets and The House on the Water’s Edge. As Caro Land she has written the legal suspense drama series, Convictions and Confessions.