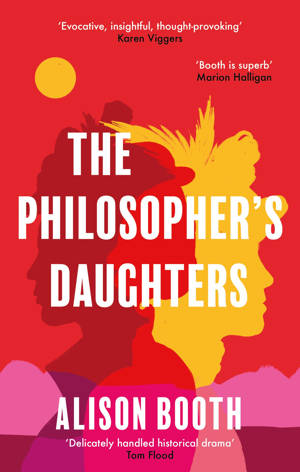 It’s my review stop today on the blog tour for The Philosopher’s Daughters by Alison Booth. My thanks to Helen from Literally PR for sending me a copy of the book for review purposes and to Anne Cater of Random Things Tours for the place on the tour.

A tale of two very different sisters whose 1890s voyage from London into remote outback Australia becomes a journey of self-discovery, set against a landscape of wild beauty and savage dispossession.

London in 1891: Harriet Cameron is a talented young artist whose mother died when she was barely five. She and her beloved sister Sarah were brought up by their father, radical thinker James Cameron. After adventurer Henry Vincent arrives on the scene, the sisters’ lives are changed forever. Sarah, the beauty of the family, marries Henry and embarks on a voyage to Australia. Harriet, intensely missing Sarah, must decide whether to help her father with his life’s work or devote herself to painting.

When James Cameron dies unexpectedly, Harriet is overwhelmed by grief. Seeking distraction, she follows Sarah to Australia, and afterwards into the Northern Territory outback, where she is alienated by the casual violence and great injustices of outback life.

Her rejuvenation begins with her friendship with an Aboriginal stockman and her growing love for the landscape. But this fragile happiness is soon threatened by murders at a nearby cattle station and by a menacing station hand who is seeking revenge. A couple of years ago I read Alison Booth’s previous novel, A Perfect Marriage, which I really enjoyed. I therefore jumped at the chance to read this, her latest book. They are very different though, with this being historical rather than contemporary.

The Philosopher’s Daughters begins in London in 1890 and concentrates on Sarah and Harriet, sisters in their early 20s. They’re a very progressive pair for the era, indeed the first scenes see Sarah at a Women’s Franchise League meeting. Somewhat surprisingly, it’s their father who encourages this independence in them. Sarah later travels with her husband to Australia, first to Sydney and then into the outback. When tragedy strikes at home, Harriet decides to follow her sister out there. I think both of them are surprised to find that they adapt to life there quite well.

I liked both of the sisters. I loved that Sarah didn’t just bow down to her husband, and I loved that Harriet was determined to be an independent woman. Both showed incredible bravery whilst in Australia too. I can’t imagine how hard it must have been to travel so far at that time. Now we have access to so much information about other countries but they must have been travelling into a certain level of the unknown.

It’s an atmospheric read with a strong sense of setting. I thought it was fascinating to read about the outback and the Aborigines. They were treated appallingly and yet still managed to be courageous and good.

I liked how the chapter headings were made up of a snippet of the chapter ahead. It meant I spent a bit of time flicking backwards and forwards but it made a change from chapters just being numbered. The ending made me smile too. One for the historical fiction fans, especially if you want to be transported to a remote backdrop. Born in Melbourne and brought up in Sydney, Alison spent over two decades studying, living and working in the UK before returning to Australia some fifteen years ago.

Her ancestors came to Australia from England and Scotland at the end of the 1800s, before Federation in 1901. Indeed, in 1891, when the novel starts, 32% of the Australian population were born overseas, mostly in the UK. Alison
grew up fascinated by the thought that Australia once comprised small colonies, teetering on the edge of the vast continent, and wanted in this new novel to travel back in time to view it through the eyes of two strong young women. The tales of Alison’s late father, Norman Booth, about his years in the Northern Territory also awakened her interest in the Northern Territory.

Her debut novel, Stillwater Creek, was Highly Commended in the 2011 ACT Book of the Year Award, and afterwards published in Reader’s Digest Select Editions in Asia and in Europe. Alison’s other novels are The Indigo Sky (2011), A Distant Land (2012), and A Perfect Marriage (2018).

Alison is Emeritus Professor of Economics at the Australian National University (https://researchers.anu.edu.au/researchers/booth-al). In November 2019, Alison was made Fellow of the Econometric Society, a prestigious international society for the advancement of economic theory in its relation to statistics and mathematics.