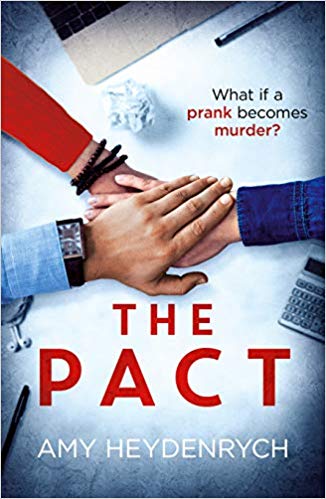 I’m really pleased to be reviewing this exciting and current book today. My thanks to Tracy Fenton for the place on the tour and to Zaffre Books for sending me a copy of the book for review purposes.

What if a prank leads to murder?

When Freya arrives at her dream job with the city’s hottest start-up, she can’t wait to begin a new and exciting life, including dating her new colleague Jay.

However, Nicole, Jay’s ex and fellow employee, seems intent on making her life a misery. After a big deadline, where Nicole continually picks on her, Freya snaps and tells Jay about the bullying and together they concoct a revenge prank.

The next morning, Nicole is found dead in her apartment . . .

Is this just a prank gone wrong? Or does Freya know someone who is capable of murder – and could she be next?

The Pact is a fabulously fast-paced story set in the world of computer coding. In just over 100 short chapters we follow Freya as she gets a job at Atypical, an up and coming San Francisco tech company. Julian is the charismatic co-owner of the business and at first everything seems to be going brilliantly for Freya as it’s clear she has a real talent and Julian recognises that. However, Nicole, one of the other employees, takes a dislike to Freya and starts to bully her.

I really felt for Freya. What a horrible situation to be in. We all imagine bullies are left behind in the school playground but that’s not the case. Freya and Jay, her new boyfriend who also works at Atypical, play a bit of a joke on Nicole which backfires as that same night she is murdered.

Freya’s story is one strand of the story and Isla’s is another. She’s a journalist who is looking into Nicole’s murder and she starts to uncover more and more about what happened that night. She starts to join the dots and the deeper she digs the more she discovers.

This is one of those stories that jumps around in time so there might be a chapter two months before Nicole’s death followed by one the day after and then another a week before. I love this kind of structure as it challenges me to put the pieces together myself and it also means the whole story unfolds before my very eyes. However, I know it’s not for everyone so if you like your books to follow a linear timeline then this will not suit you.

I think The Pact got off to a relatively slow start, lots of scene setting and introductions to characters, but then from just before the half way point I started to absolutely race through it. It’s compelling and riveting reading that had me turning those pages as fast as I could. The short chapters helped as they really ramped up the tension. The ending was a bit of a surprise and I’m still processing it. Really clever though. Amy is a writer and book blogger based in South Africa. She has been shortlisted twice for the acclaimed Miles Morland African Writing Scholarship. Her short stories and poems have published in multiple anthologies including Brittle Paper, The Kalahari Review and the Short Sharp Stories anthologies. When she is not writing her own fiction, she ghost-writes books and columns for global tech and financial companies.