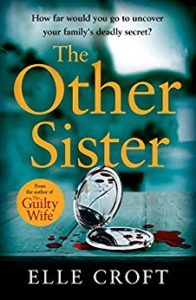 I’m delighted to be reviewing The Other Sister by Elle Croft today as part of the blog tour. My thanks to Alainna Hadjigeorgiou from Orion Books for the place on the tour and the review copy via Netgalley.

I love a nice twisty psychological thriller and that’s exactly what The Other Sister is. Gina Mills had a sister but she died many years ago and that loss has always been there in the background for her and her brother Ryan. Gina is trying now to forge herself a career as a newsreader at Channel Eight but her boss doesn’t want to know. When she comes across a body one night on her way home and decides to live broadcast it on the internet, it brings her a certain notoriety.

The second body she stumbles across turns a tragic discovery into a rather shocking coincidence. It seems unbelievable that it could have happened to her twice but that is indeed the case. Could it be possible that she was meant to find both bodies?

Well, to find that out you’ll have to read the book but, let me tell you, I could never have imagined the turn that this book would take. As it progressed I started to get an inkling, but Elle Croft has written the story in such a way that it’s impossible to second guess anything that’s happening. You just have to go with the flow and see where the story takes you which is no bad thing at all.

It’s a very original storyline, slightly incredible as is the way with many psychological thrillers, but yet also completely possible. I loved the way the story jumped around between various points of view, that of Gina, Ryan, their mother back in 1996, and the detective investigating the two women’s deaths. It enabled me to see the story from different angles. I still didn’t know where it was going though!

I found The Other Sister to be a gripping and thrilling read. I liked the characterisations, particularly Gina and her boyfriend, Julian, and the story was so clever, particularly the ending which blew my mind a little bit. All in all, a great read, one that kept me guessing from start to finish and one which I thought was unusual and skilfully plotted. Elle Croft was born in South Africa, grew up in Australia and moved to the UK in 2010 after travelling around the world with her husband. She works as a freelance social media specialist and also blogs about travel, food and life in London.