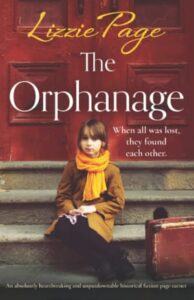 The Orphanage by Lizzie Page is published by Bookouture in eBook and paperback and is available now.

Shilling Grange Orphanage, England, 1948.She was their only hope. Now they are hers. A gritty, heartbreaking and unforgettable story of love and hope in the darkest of times.

Clara Newton is the new Housemother of Shilling Grange Orphanage. Many of the children have been bombed out of their homes and left without families, their lives torn apart by the war, just like Clara’s. Devastated by the loss of her fiancé, a brave American pilot, she is just looking for a place to start again.

But the orphans are in desperate need of her help. Funds are short, children cry out in the night,and tearful Rita tells Clara terrible stories about the nuns who previously ran Shilling Grange. Clara cannot bear to see them suffer, but what does she know about how to look after eight little ones?

Clara can’t get anything right, and then she accidentally ruins Rita’s only memento of her mother. Overwhelmed, she wonders if they’d be better off without her. But she’s not completely alone. Living next door is Ivor: ex-Shilling Grange resident, war hero, and handyman with deep brown eyes. He doesn’t trust Clara and she is fiercely independent, but he has a way with the children. And with his support and the help of other locals, Clara begins to find her way.

As she heals from her grief and adjusts to her new life, Clara wonders if she has finally found her home and family among the orphans. Can she find the strength to fight for them when nobody else will?And dare she open her heart to love again?

A heart-wrenching and totally gripping read. Fans of Before We Were Yours, Diney Costeloeand The Orphan Sisters won’t be able to put this book down. I love Lizzie Page’s books. She’s an author whose books I always look forward to reading. The Orphanage is a bit of a departure from her usual stories, both because it’s set after the Second World War in 1948 rather than during wartime, and because it’s the first in a series set at Shilling Grange Children’s Home in Suffolk.

Clara Newton takes a job as the Housemother at Shilling Grange. She lost her fiancé in the war and her new role offers a new start with eight children of varying ages to look after. She makes plenty of mistakes and it certainly doesn’t come naturally to her, but looking after the children offers them the love they have lacked and Clara learns a lot about herself and her abilities along the way.

I thought this was a thoroughly absorbing and lovely book, and I really took to Clara and her brood. The Children’s Act had just been established in 1948 and for the first time the state was responsible for children’s care. It was long overdue and for the children in the book it means that for the first time they are properly cared for and listened to. I didn’t really have a favourite amongst them as they were all brilliant characters and quite an eclectic bunch. They made me laugh but there were also some very sad and moving times in their lives and it really was heartbreaking to think of what they had been through.

Page has a fantastic writing voice which draws the reader in and puts them in the heart of the story with her insightful descriptions and astute observations. She also writes with a dry humour that I really appreciate and which invariably brings a smile to my face. I’m wondering what will happen to Clara and the children in book two and whether Clara’s love life sorts itself out or not. I can’t wait to find out! I really loved The Orphanage.