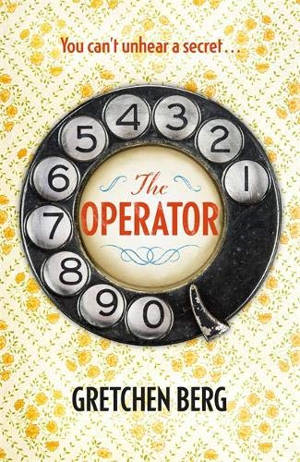 Welcome to my stop on the blog tour for The Operator by Gretchen Berg. This is a book I have been wanting to read for a while. My thanks to Alara Delfosse from Headline for sending a copy of the book for review purposes and to Anne Cater of Random Things Tours for the place on the tour.

An irresistible, uplifting and warm-hearted novel about a 1950s switchboard operator who learns a shocking secret about her marriage when she eavesdrops on a scandalous phone conversation.

It’s 1952. The switchboard operators in Wooster, Ohio, love nothing more than to eavesdrop on their neighbours’ conversations, and gossip about what they learn. Vivian Dalton is no different (despite her teenage daughter’s disapproval), and always longs to hear something scandalous. But on the night of December 15th, she wishes she hadn’t. The secret that’s shared by a stranger on the line threatens to rip the rug of Vivian’s life from under her.

Vivian may be mortified, but she’s not going to take this lying down. She wants the truth, no matter how painful it may be. But one secret tends to lead to another . . .

This moving, heart-felt and ultimately uplifting novel brilliantly weaves together an irresistible portrayal of a town buzzing with scandal, and an unforgettable story of marriage, motherhood and the unbreakable ties of family. I must admit to being a bit of a nosy parker and the premise of this novel, that of a woman working a switchboard in the 1950s listening into calls, did rather pique my interest.

Vivian Dalton is that woman in small town America: Wooster, Ohio, in fact. The small town feeling is portrayed really well, all the petty little things that matter to the women of the town in particular, trying to outdo each other at every turn. Vivian regularly listens in to the calls she has connected, long after she should. This makes her privy to gossip from the town but one night she hears gossip that threatens to change her own life.

This book wasn’t quite what I expected. I thought it would be all about the repercussions of that phone call, and in a way it was, but there was a lot of looking back at Vivian’s past, and some seemingly unrelated sections about an embezzlement at the local bank (they are related but it doesn’t become clear until later in the book). In fact, everything that happens in this book is all linked but the reasons unfold gradually and I was surprised by everything, even the thing that rocks Vivian’s world in the first place.

The setting is strong and I think it’s a great idea for a book. I wasn’t particularly drawn to any of the characters but I’m not sure I was meant to like them. To be fair, they do exhibit many of the more unpleasant traits of human nature!

This is a solid debut from Gretchen Berg full of secrets and lies. There was a lot I enjoyed about it. Just remember, next time you hold a glass to a wall or eavesdrop on a private conversation, you might just hear something you wish you hadn’t (what do you mean you don’t do that?!). Gretchen Berg grew up in the US Midwest and now lives in Oregon. She has always been curious about history and family dynamics, and has a personal family tree of over 16,000 people. Her family research started with her own grandmother’s little brown notebook full of details, and it was the story of her grandmother – herself a switchboard operator in Wooster, Ohio, in the 1950’s – that inspired this book and partly provides an authenticity to the narrative.

THE OPERATOR is her astonishingly accomplished first novel with a vibrant narrative full of brilliantly portrayed characters, surprise plot twists, and a deftly handled exploration of the issues of class and race relations in 1950’s America.