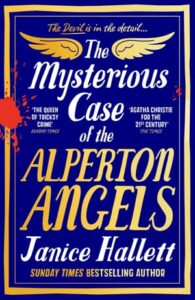 The Mysterious Case of the Alperton Angels by Janice Hallett will be published by Viper on 19th January 2023 in hardback, eBook and audiobook. My thanks to the publishers for the proof copy.

Open the safe deposit box. Inside you will find research material for a true crime book. You must read the documents, then make a decision. Will you destroy them? Or will you take them to the police?

Everyone knows the sad story of the Alperton Angels: the cult who brainwashed a teenage girl and convinced her that her newborn baby was the anti-Christ. Believing they had a divine mission to kill the infant, they were only stopped when the girl came to her senses and called the police. The Angels committed suicide rather than stand trial, while mother and baby disappeared into the care system.

Nearly two decades later, true-crime author Amanda Bailey is writing a book on the Angels. The Alperton baby has turned eighteen and can finally be interviewed; if Amanda can find them, it will be the true-crime scoop of the year, and will save her flagging career. But rival author Oliver Menzies is just as smart, better connected, and is also on the baby’s trail.

As Amanda and Oliver are forced to collaborate, they realise that what everyone thinks they know about the Angels is wrong. The truth is something much darker and stranger than they’d ever imagined. And the story of the Alperton Angels is far from over..

After all, the devil is in the detail… Janice Hallett excels at using emails, transcripts, and other similar devices to tell her innovative stories. I enjoyed The Appeal and The Twyford Code, and now the queen of the quirky format is back with her third book, The Mysterious Case of the Alperton Angels.

The book begins with a dilemma. There is a key to a safe deposit box which contains the research material carried out by Amanda Bailey for her book about the Alperton Angels. By the end of the book, a decision must be made. Should the material be buried or handed over to the police? Amanda is a true crime writer researching the Alperton Angels which is a well-known case about a cult who made a teenage girl believe her baby was the anti-Christ and that the baby must be killed.

Luckily for the reader, Amanda is diligent about recording and transcribing EVERYTHING to do with her research which means we get to see it from all angles: her formal requests for information, the way she tries to wheedle details from former associates (methods which sometimes felt a bit grubby), conversations and texts between her and her rival author, Oliver, and so on. Hallett does a brilliant job of making it seamless and not forced. I will say that I found it quite complicated at times and if it wasn’t fiction then I would have had to make copious notes, but it’s also a very easy book to be swept along with and to just enjoy as a piece of VERY creative writing.

I’m not generally a fan of books made up completely of letters, emails etc but Hallett has nailed it once again and I can’t wait to see what she comes up with next.

Janice Hallett studied English at UCL, and spent several years as a magazine editor, winning two awards for journalism. After gaining an MA in Screenwriting at Royal Holloway, she co-wrote the feature film Retreat. The Appeal is inspired by her lifelong interest in amateur dramatics. Her second novel, The Twyford Code, will be published by Viper in 2022. When not indulging her passion for global adventure travel, she is based in West London.