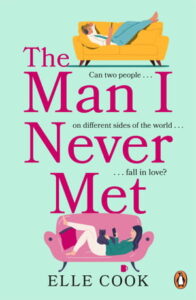 ShortBookandScribes #BookReview – The Man I Never Met by Elle Cook

The Man I Never Met by Elle Cook will be published by Penguin Century on 24th November in paperback, eBook and audiobook. My thanks to Laura O’Donnell for the proof copy of the book.

Two lives are about to be changed by one phone call…

When Davey misdials Hannah’s number, at first they think nothing of it.

After all, Davey lives in Texas and Hannah lives in London.

But when Davey gets a job in London, their paths are sure to cross. As messaging turns to video calling, this feels like the start of something.

Weeks later, Hannah is waiting for Davey at the airport, but he never walks into Arrivals.

When Hannah finds out why, her world is turned on its head. And with their future so uncertain, each must pick up the pieces of their lives.

Will fate intervene once more to bring them together? Or will Davey always be the man that Hannah never met? The Man I Never Met is an absolutely pitch-perfect romance novel, which combines a beguiling love story with serious issues and manages to be light but not frothy. No mean feat from Elle Cook but she’s achieved it with aplomb.

When Hannah receives a misdialled telephone call from Davey they hit it off immediately but she’s in London and he’s in Texas. However, Davey is about to move to London to start a new job and they excitedly make plans to meet as there’s such a strong connection between them. So when Hannah waits at the airport and Davey doesn’t arrive she can’t understand what’s gone wrong.

That’s where the blurb ends and so I won’t say anymore about the story but what follows is emotional and touching, and ultimately uplifting. The writing is simply divine, wonderfully honest and at times raw, but so moving and sensitive as well. I laughed too – humour isn’t lost amongst the difficult times for the star-crossed couple.

The characters are superb, not just Hannah and Davey (spot-on romantic hero and heroine) but their friends and family too. I had a particular soft-spot for Joan, Hannah’s landlady and neighbour, with their shared love of fancy coffees over the garden fence and giving them a score out of five.

I’ve enjoyed this author’s historical books (as Lorna Cook) but I was really pleased to see that more from Elle is on the horizon as The Man I Never Met really hit the spot for me. Basically, I loved it and I can’t recommend it highly enough. Oh, and I now have a yearning to re-watch A Room With a View (I’m not telling you why but if you read this book you’ll want to watch it too!).

Elle Cook worked as a journalist and in PR before becoming a full-time novelist. The Man I Never Met is her first contemporary novel.

She is also the author of four historical time-slip novels under her real name, Lorna Cook. The Forgotten Village, The Forbidden Promise, The Girl From the Island and The Dressmaker’s Secret have sold over 300,000 copies combined. She lives in costal Essex with her husband and two daughters.