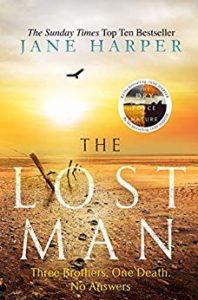 I’m delighted to be taking part in the epic blog tour for The Lost Man by Jane Harper. My thoughts are below. I’d like to thank Caolinn Douglas from Little, Brown for asking me to be a part of the tour and for providing a copy of the book for review via Netgalley.

He had started to remove his clothes as logic had deserted him, and his skin was cracked. Whatever had been going through Cameron’s mind when he was alive, he didn’t look peaceful in death.

Two brothers meet at the remote border of their vast cattle properties under the unrelenting sun of the outback. In an isolated part of Australia, they are each other’s nearest neighbour, their homes hours apart.

They are at the stockman’s grave, a landmark so old that no one can remember who is buried there. But today, the scant shadow it casts was the last hope for their middle brother, Cameron. The Bright family’s quiet existence is thrown into grief and anguish.

Something had been troubling Cameron. Did he choose to walk to his death? Because if he didn’t, the isolation of the outback leaves few suspects…

I’ve heard a lot about Jane Harper’s books but this is the first I have read. I’m not sure what I was expecting, probably a crime novel, but The Lost Man is what I would call a domestic drama.

It’s hugely atmospheric, set in the Australian outback in intense heat. I could almost feel the sun beating down, the dust, the arid conditions, the sense of space.

The main character is Nathan Bright, a man who is living a solitary life. His family are as near as they can be, on neighbouring land, but they’re still miles away. One day, his brother, Cameron, is found dead near a local landmark, the stockman’s grave. It’s a puzzling death as nobody who knew the landscape as well as he did would just have wandered off like that.

From that start we then follow the remaining family over the Christmas period as they deal with Cameron’s death, other family matters that come to light, and old grievances which rear their ugly head.

The Lost Man is a story of family relationships, of how the past can affect the future. It’s a slow burner of a read and I mean that in the best possible way. It takes its time to build up, to reveal itself to the reader and even when it does so it does it incrementally. I liked Nathan a lot and I found the ending of the book to work really well from his point of view.

There’s a real sense of mistrust in this book, an underlying tension between all the characters which is impossible for the reader to ignore. It’s quite bleak in many ways, and that seems to fit well with the landscape, for the setting is as much a character as any other.

I enjoyed The Lost Man a lot. It’s an intense and brooding family story which kept my interest all the way through. Jane Harper is the author of The Dry, winner of various awards including the 2015 Victorian Premier’s Literary Award for an Unpublished Manuscript, the 2017 Indie Award Book of the Year, the 2017 Australian Book Industry Awards Book of the Year Award and the CWA Gold Dagger Award for the best crime novel of 2017. Rights have been sold in 27 territories worldwide, and film rights optioned to Reese Witherspoon and Bruna Papandrea. Jane worked as a print journalist for thirteen years both in Australia and the UK and lives in Melbourne.