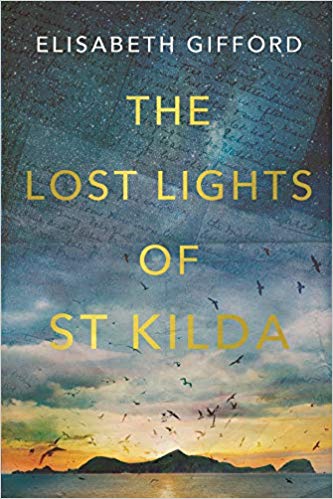 It’s my stop on the blog tour for The Lost Lights of St Kilda by Elisabeth Gifford and I’m reviewing the book today. My thanks to Kirsty Doole from Corvus Books for the copy of the book for review purposes and to Anne Cater of Random Things Tours for the place on the tour.

1927: When Fred Lawson takes a summer job on St Kilda, little does he realise that he has joined the last community to ever live on that beautiful, isolated island. Only three years later, St Kilda will be evacuated, the islanders near dead from starvation. But for Fred, memories of that summer – and the island woman, Chrissie, with whom he falls in love – will never leave him.

1940: Fred has been captured behind enemy lines in France and finds himself in a prisoner-of-war camp. Beaten and exhausted, his thoughts return to the island of his youth and the woman he loved and lost. When Fred makes his daring escape, prompting a desperate journey across occupied territory, he is sustained by one thought only: finding his way back to Chrissie.

The Lost Lights of St Kilda is a sweeping love story that crosses oceans and decades. It is a moving and deeply vivid portrait of two lovers, a desolate island and the extraordinary power of hope in the face of darkness. I have very fond memories of Elisabeth Gifford’s first book, Secrets of the Sea House. That was a dual timeframe story with a similar setting to The Lost Lights of St Kilda, that being the islands of Scotland.

In The Lost Lights… the two aspects of the story take place quite close together, in 1927 and 1940. The earlier story is set on St Kilda, a very isolated island where the villagers are far from thriving. They are largely forgotten, even the mail ship doesn’t stop there. Fred Lawson and Archie Macleod visit one summer and Fred is captivated by Chrissie, a young islander. But the path of love does not run smoothly for them. We see events from Fred’s point of view and from Chrissie’s.

Then in 1940 Fred is in France during World War II, one of the Cameron Highlanders. We witness his daring attempts at escape but what it also gives him is a reason to live and to try and return to Chrissie.

This is a beautifully written, lyrical and lilting novel. I’m always so drawn to island stories, especially Scottish islands. I think there’s a romantic feel to the windswept, stark nature of them, although in reality it’s far from perfect and is often such a difficult life. Elisabeth Gifford puts across perfectly the difficulties that the St Kildans faced and she’s obviously done a lot of research into the island and the people who called it their home. Their plight in having to leave is plain to see.

This is not a quick or fast paced read and I didn’t always find it the easiest of reads as it’s quite intense, but it’s full of atmosphere and is such a moving story. It’s a book to savour as the setting draws the reader in and the sparse but poetic writing put me right there, whether it be on St Kilda or in France. It’s ultimately the unfolding of a love story over a number of years but it’s just as much a love letter to St Kilda too. Elisabeth Gifford grew up in a vicarage in the industrial Midlands. She studied French literature and world religions at Leeds University. Her bestselling novel, Secrets of the Sea House, was shortlisted for the Historical Writers’ Association’s Debut Crown for Best First Historical Novel in 2014. She is married with three children, and lives in Kingston upon Thames.