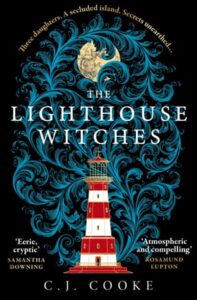 The Lighthouse Witches by C.J. Cooke is published by Harper Collins and is available now in paperback, eBook and audiobook. This is another book that I won in an author giveaway (thank you C.J.) last year that has been patiently waiting in a ‘pile to be read soon’ at the side of my bed. Better late than never!

Upon the cliffs of a remote Scottish island stands a lighthouse. Strange and terrible events have happened here. It started with a witch hunt. Now, centuries later, islanders are vanishing.

Liv Stay and her children don’t believe in witches or curses. But within months of arriving on the island, her daughter Luna is the only one of them left.

Faced with the impossible, it’s up to Luna to find out what really happened at the lighthouse all those years ago. Wow. What a book. What…A….Book! A combination of a remote Scottish island, a lighthouse and witches. I don’t think it could get any better.

In 1998, Liv and her three daughters, Sapphire, Luna and Clover, travel to the island of Lòn Haven, off the coast of the Black Isle in Scotland. Liv is to paint a mural on the walls of The Longing, the island’s lighthouse. In 2021, Luna returns to Lòn Haven, the place where her mother and two sisters vanished without trace twenty-three years earlier. Interspersed with these two narratives is the story of the witch hunts that took place on the island in the 1600s.

This book has an ethereal feel coupled with the realities of life as a single mother for Liv, giving it an all-important (to me) foot in reality. It also feels sinister and eerie and to my surprise, as not many books achieve this, I was rather unnerved by it, a feeling of unease creeping over me as the tension builds in all three of the timelines.

This book couldn’t be rushed. I wanted to soak up every little detail. It’s full of atmosphere in a closed and judgemental setting and Liv and her family are outsiders trying to fit in amongst the island’s myths and folklore that spans centuries. I sensed her unease, especially when things that were starting to make sense to her were also completely unpalatable and unthinkable.

The Lighthouse Witches is gothic, unsettling and witchy, with multiple perspectives and timelines, and a family mystery at the heart of it. When the ending came it was clever and well thought out and it worked brilliantly. It had exactly what I love in a book: a story that gripped me hard from the outset and only let go when I turned the final page, a setting that had me in its thrall, and superb writing and plotting. I thought I would enjoy it but it completely exceeded all my expectations and I absolutely adored it.

C.J. Cooke is an acclaimed, award-winning poet, novelist and academic with numerous other publications written under the name of Carolyn Jess-Cooke. Her work has been published in twenty-three languages to date. Born in Belfast, C.J. has a PhD in Literature from Queen’s University, Belfast, and is currently Reader in Creative Writing at the University of Glasgow, where she researches creative writing interventions for mental health. C.J. Cooke lives in Glasgow with her husband and four children.