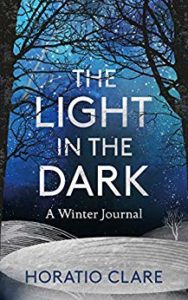 ShortBookandScribes #BookReview – The Light in the Dark: A Winter Journal by Horatio Clare

I’ve had this lovely book for a little while and really wanted to make sure I read it before winter was out as it’s all about the effects of the season on the author. Happily I made it! My thanks to Elliott & Thompson for providing me with a copy of the book.

As November stubs out the glow of autumn and the days tighten into shorter hours, winter’s occupation begins. Preparing for winter has its own rhythms, as old as our exchanges with the land. Of all the seasons, it draws us together. But winter can be tough.

It is a time of introspection, of looking inwards. Seasonal sadness; winter blues; depression – such feelings are widespread in the darker months. But by looking outwards, by being in and observing nature, we can appreciate its rhythms. Mountains make sense in any weather. The voices of a wood always speak consolation. A brush of frost; subtle colours; days as bright as a magpie’s cackle. We can learn to see and celebrate winter in all its shadows and lights.

In this moving and lyrical evocation of a British winter and the feelings it inspires, Horatio Clare raises a torch against the darkness, illuminating the blackest corners of the season, and delving into memory and myth to explore the powerful hold that winter has on us. By learning to see, we can find the magic, the light that burns bright at the heart of winter: spring will come again.

I’m not a regular reader of non-fiction so when I do pick it up it’s usually because there’s something specific about it that captures my interest. With The Light in the Dark, it was Horatio Clare’s thoughts on winter, a season which has an adverse effect on so many. Personally, I quite enjoy the dark nights and the dismal weather (I’m a strange sort!) but I completely understand how just those things can induce depression and sadness.

Clare suffers in this way and so writes a diary from November through to March, to the first signs of spring. It’s a beautifully written and lyrical look at the winter months from his point of view, following him as he deals with it on a day to day basis, covering his life in the north, trips to see his mother in rural Wales, family life and, most tellingly, his own feelings.

Despite the fact that he’s obviously suffering, Clare’s prose is stunning, even about the things that are depressing him. He’s obviously able to see the beauty in nature, the weather and his surroundings, even if that beauty cannot penetrate his mind.

It’s quite an introspective read and I’m not sure that it would help if your thoughts on winter are in a similar vein to that of the author’s, although maybe seeing it through another’s eyes would be beneficial. If you want a book that focuses on winter and the changing of the seasons then this poetic and melancholy read is perfect.

Horatio Clare is a critically acclaimed author and journalist. His first book, Running for the Hills: A Family Story, won the Somerset Maugham Award. His second book, Truant is ‘a stunningly-written memoir’, according to the Irish Times. A Single Swallow: Following an Epic Journey from South Africa to South Wales, was shortlisted for the Dolman Travel Book of the Year; Down to the Sea in Ships: Of Ageless Oceans and Modern Men won the Stanford-Dolman Travel Book of the Year 2015. Horatio’s first book for children, Aubrey and the Terrible Yoot, won the Branford Boase Award 2016 for best debut children’s book. He lives in West Yorkshire.