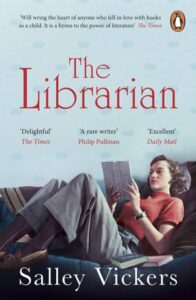 The Librarian by Salley Vickers is published by Penguin Viking in paperback, eBook and audiobook. I just love the paperback cover!

In 1958, Sylvia Blackwell, fresh from one of the new post-war Library Schools, takes up a job as children’s librarian in a run down library in the market town of East Mole.

Her mission is to fire the enthusiasm of the children of East Mole for reading. But her love affair with the local married GP, and her befriending of his precious daughter, her neighbour’s son and her landlady’s neglected grandchild, ignite the prejudices of the town, threatening her job and the very existence of the library with dramatic consequences for them all.

The Librarian is a moving testament to the joy of reading and the power of books to change and inspire us all. Over the last few days I’ve been transported to the late 1950s and to East Mole, a small town where a young woman named Sylvia Blackwell has moved to become the new Children’s Librarian. Working under Mr Booth, her rather unfriendly boss, she has the (sometimes herculean) task of trying to get the children of the town interested in reading again.

I love to read books about libraries and books so I was really looking forward to The Librarian. I felt it got off to a roaring start as Sylvia moves to East Mole, rents a tiny cottage and begins to make new friends. The era is well-portrayed, a mixture of 50s provincial stiff upper lip combined with some of the freedoms and cultural changes that were starting to be seen after the war, particularly for younger people. This is especially noticeable in some of the relationships in this book, like Sylvia’s rather surprising affair with the new GP in town which I thought felt a bit like she was rebelling against the conformities of earlier in the decade.

In a way, I wasn’t entirely sure what this book was trying to be: was it meant to be a twee and cosy read, which is how it quite often felt, or was it meant to be a more risqué story? Somehow I felt the combination of both seemed a little odd. I also didn’t much care for part two, which came right towards the end and shifted the focus from the 50s to the present day. I just didn’t see the need for it and would much rather have had a short epilogue about what Sylvia did next.

So this was a book that gave me mixed feelings really. I did like so much of it and thoroughly enjoyed following Sylvia’s initiation into East Mole life, and the bits about the books she was recommending and the way she went about transforming the children’s library. I also liked the way she forged her own, more independent path. There were just those little niggles that didn’t really sit right for me, but on the whole I found it a charming, observant and often sharp-witted tale of the strength of the written word and its long-lasting effects on children.

Salley Vickers is the author of many acclaimed novels including the best-selling Miss Garnet’s Angel, Mr Golightly’s Holiday, The Other Side of You and The Cleaner of Chartres (Viking 2012) and two short story collections, the latest The Boy Who Could See Death (Viking 2015). She has worked as a cleaner, a dancer, a teacher of children with special needs, a university lecturer and a psychoanalyst. She now writes and lectures full time. Find out more at www.salleyvickers.com or @SalleyVickers.