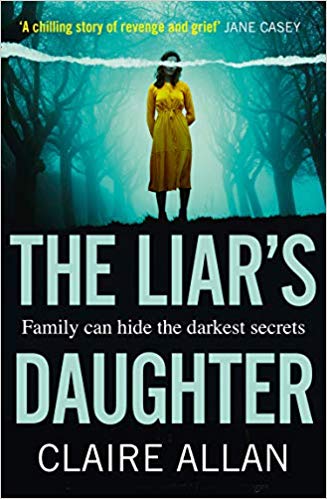 I’m delighted to be taking part in the blog tour for The Liar’s Daughter by Claire Allan today. It’s a fantastic read and you can read my thoughts below. My thanks to Avon Books for the place on the tour and the copy of the book for review purposes.

No one deserves to be taken before their time. Do they?

Joe McKee – pillar of the Derry community – is dead. As arrangements are made for the traditional Irish wake, friends and family are left reeling at how cancer could have taken this much-loved man so soon.

But grief is the last thing that Joe’s daughter Ciara and step-daughter Heidi feel. For they knew the real Joe – the man who was supposed to protect them and did anything but.

As the mourners gather, the police do too, with doubt being cast over whether Joe’s death was due to natural causes. Because the lies that Joe told won’t be taken to the grave after all – and the truth gives his daughters the best possible motive for killing him…

I’ve really enjoyed Claire Allan’s previous books and she’s one of those authors whose books I want to read without knowing very much about them. I actually think, after reading The Liar’s Daughter, that she’s getting better with every book.

This is the story of two women: Heidi and Ciara. Ciara is Joe McKee’s daughter and Heidi is his stepdaughter. As Joe lays dying each woman feels compelled to return to help care for him, despite the fact that there is no love lost between any of them at all. I had a really good idea about why this was, and I wasn’t wrong, but the unfolding of this dark tale of twisted relationships still moved me emotionally.

It’s not an easy book to read because of the subject matter, and I imagine it wasn’t an easy book to write too, but Allan has done a brilliant job at portraying not only what the women have been through but also the knock-on effects of it, of how they both felt alone and how they dealt with their inner demons.

Joe’s death wasn’t a natural one in the end and part of the story concentrates on what happened to him. However, the larger part focuses on how those around him dealt with his life and his death. It’s such a sad story to read and I found it absolutely compelling from beginning to end.

With the exception of the odd flashback scene, almost all the action takes place in Joe’s house as his family gather before his death and then deal with the aftermath. This makes for a quite claustrophobic setting, and given that there are only a few people there, almost a locked room mystery as to the nature of his death.

The Liar’s Daughter is a powerful and absorbing story and a triumph for the author.

Claire Allan is a Northern Irish author who lives in Derry-Londonderry.

Claire has followed up on the success of Her Name Was Rose with Apple of My Eye and Forget Me Not.

Her next novel, The Liar’s Daughter, is out now.

She is working on a fifth psychological thriller at present.