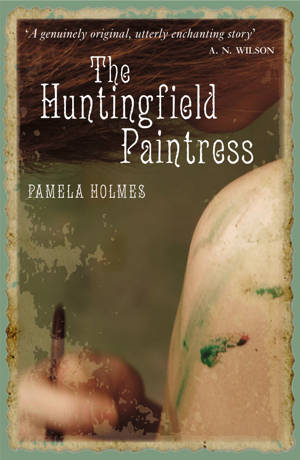 I’m so pleased to be reviewing The Huntingfield Paintress by Pamela Holmes today on the opening day of the blog tour. My thanks to Kelly Lacey from Love Books Tours for the place on the tour. The book was actually one off my own TBR pile!

Plucky and headstrong Mildred Holland revelled in the eight years she and her husband, the vicar William Holland, spent travelling 1840s Europe, finding inspiration in recording beautiful artistic treasures and collecting exotic artefacts. But William’s new posting in a tiny Suffolk village is a world apart and Mildred finds a life of tea and sympathy dull and stifling in comparison. When a longed-for baby does not arrive, she sinks into despondency and despair. What options exist for a clever, creative woman in such a cosseted environment? A sudden chance encounter fires Mildred’s creative imagination and she embarks on a herculean task that demands courage and passion. Defying her loving but exasperated husband, and mistrustful locals who suspect her of supernatural powers, Mildred rediscovers her passion and lives again through her dreams of beauty. Inspired by the true story of the real Mildred Holland and the parish church of Huntingfield in Suffolk, the novel is unique, emotive and beautifully crafted, just like the history that inspired it.

The Huntingfield Paintress is a novel with a blurb that captured my attention but which doesn’t really give a great deal away. I’m wondering how much to say about the plot in my review as the task that Mildred Holland undertakes really happened and is well documented, and yet it’s something I knew nothing about and so I approached the story completely fresh.

Mildred and her husband, William come to Huntingfield, a small Suffolk village, so that he can take up his position as Rector of the church there. They had spent the previous eight years travelling on the continent, seeing sights that most people at the time couldn’t hope to see, for this is the mid-1800s. After such incredible experiences, Mildred finds Huntingfield too quiet, she is stifled and feels she does not have a role to play. Of course, she’s the Rector’s wife and there are demands that come with that but she feels adrift.

Until, that is, she takes on a huge project, connected to the church. She decides to paint the ceiling. For a woman to do such a thing at that time, well it was quite shocking, especially for the closeted villagers. What often amazes me in historical fiction is the scorn and hatred for a strong woman, not least by fellow women. Thank goodness we have moved on from that.

Mildred is indeed a strong woman. I thought she was magnificent. This is the author’s imagining as not much is known about the real Mildred, but surely she must have been incredibly plucky to even consider going against the conventions of the time and taking on such a gargantuan task.

I’ll admit I found the first half of the book a little slow. It sets the scene for Mildred’s growing discomfort with her purpose in life and is necessary to fully portray that, but I was always waiting for something to happen and then it did and it was wonderful. I flew through the second half of the story and loved every bit of it, leading up to an ending that left me feeling really quite emotional.

This is fiction with a root based in reality, something I really enjoy. The writing is beautiful and the characterisations are perfectly done. I found The Huntingfield Paintress to be an absorbing and fascinating read, one that showcases the legacy that Mildred Holland left behind. Pamela Holmes was born in Charleston, South Carolina. At the age of eight, she moved with her family to England. She studied nursing at London University as a mature student having spent three years living on a commune in Somerset where she developed a love of gardening, milking cows and laying hedges. She became a health journalist and on-screen reporter. She now works and volunteers to improve the lives of older people including those with dementia, and she sings in a rock band. The Huntingfield Paintress is her first novel. She won the Jane Austen Short Story Award in 2014 and her latest work was awarded Highly Recommended in the HISSAC competition 2015. Pamela is the mother of two boys and lives in London with her husband.