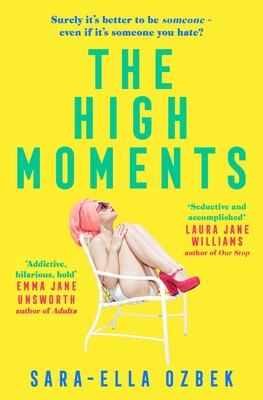 Today I’m sharing my thoughts about The High Moments by Sara-Ella Ozbek. My thanks to Sara-Jade Virtue from BATC/Simon & Schuster for the proof copy of the book for review purposes.

Scarlett is far from perfect.

She changes herself to please others.
She makes mistakes – over and over again.
She repeatedly goes back to people that have hurt her.

Scarlett has a tricky relationship with her mother and is desperate for people to like her.

She moves to London without a plan, but when she manages to land a job at a modelling agency she thinks that her life is finally on track.

Scarlett soon discovers that the fashion industry is far from what she had imagined and her life begins to spiral out of control. But at least people know who she is. She is starting to become someone.

And surely it’s better to be someone – even if it’s someone you hate?

With a vein of dark humour at its core, The High Moments offers an astute, often stark, look at the fashion industry and the challenges you can face as a woman in your twenties. Fans of Emma Jane Unsworth’s Animals and shows like Girls will love this. The High Moments is a fully engrossing story that reinforces the fact that the grass isn’t always greener.

Scarlett hails from a small town in Devon. She longs to escape to London, get away from her mother, and become a fashion designer. Without any plan as to what she will do when she gets there, she goes to London and she manages to get herself a job at a model agency, dealing with the bookings with a view to becoming an agent herself.

From the off I wanted Scarlett to remember that being a model agent wasn’t what she wanted to do. But I also knew that it was a starting block, a better than nothing situation. I struggled at times to take to Scarlett; she’s young, she’s inexperienced, she makes terrible decisions, she wants people to like her and tends to be a bit two-faced to achieve it. Instagram followers are more important to her than doing the right thing. And yet I could see that underneath all that she was vulnerable, in a strange new world of fashionistas, drugs and parties, being led astray whilst revelling in her newfound freedom and feeling flushed with success.

In all honesty, when I started this read I wasn’t sure I was going to like it. I didn’t feel like the target audience and didn’t gel immediately with Scarlett. But as I read on I started to become absolutely caught up in her life (car crash that it seemed to be) and genuinely hoped for the best for her. I was also totally absorbed in the model agency world, about which the author writes from experience. I can categorically say that that world would never be for me but what a ride to follow Scarlett’s initiation into the competitive and often shallow environment.

I really enjoyed Sara-Ella Ozbek’s writing. She managed to make me feel sympathetic towards Scarlett whilst also disliking her behaviour for a fair amount of the story. Her other characters are sharp and jump off the page, and I was fully immersed in the model agency setting. This is a slice of life story about a young woman in her 20s who wants to make it but goes on a rather circuitous route to find herself. I thought it was an excellent debut from Ozbek which felt very current and very stylish.

Sara-Ella Ozbek is a London based writer. Her first novel THE HIGH MOMENTS will be published by Simon & Schuster in May 2020, with the second set for the following year. As a journalist, Sara-Ella has written for titles including Tatler, Because Magazine, Suitcase, Drugstore Culture, Voyage D’Etudes and Soho House Notes, covering stories on fashion, travel, culture and – when she’s allowed to – feminism. She works part-time as a development producer for Finch Films, scouting mainly for literary material. Sara-Ella has a BA single honours degree in English Literature from the University of Exeter and a screenwriting qualification from the New York Film Academy. Between education, she worked in the fashion industry.