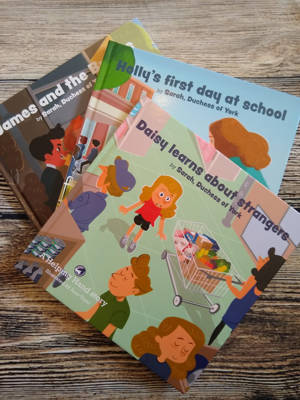 I’m really pleased to be taking part in the blog tour for the three Helping Hand Stories by Sarah, Duchess of York today. They’re great for both children and parents to help to deal with tricky situations. You can find more information on the Helping Hands website.

My thanks to the publishers for sending the books for review – I was thrilled to notice that one of them is signed by the Duchess!! Thank you also to Anne Cater of Random Things Tours for the place on the tour.

Rather than sharing blurbs, I thought I would share an interview with the Duchess which talks about why she wrote the books.

Why did you write the Helping Hand stories?
The simple answer is that I was originally asked to by a UK pharmacy chain who felt there
was a need for them. But as I started to work on the stories, listened to Dr Richard
Woolfson, the child psychologist who worked closely with us, and talked to mums with
young children, it became clearer and clearer to me that this was something I could really
contribute to. If we could tackle the issues that all children face growing up by using that
oldest but most effective technique, storytelling, to create something that invited young
children to start understanding those issues whilst being of practical help to parents, we
would be doing something really worthwhile.

Why have you decided to republish them now?
Two reasons: firstly the importance of encouraging people of all ages to talk about difficult
experiences as a healthy thing to do has become increasingly prominent and accepted. The Helping Hand stories are designed to help both parents and young children to do exactly that. My hope is that parents (and grandparents) will read the books with their children and talk about the stories after they have read them. Secondly, they were extremely popular with customers of the pharmacy chain but there is a much bigger audience out there who will not have come across the books yet – and will hopefully find them just as useful. We have brought them up to date in a bigger format with fantastic new illustrations – I can say that as I didn’t do them! They are the work of a very talented illustrator, Amit Tayal – thank you Amit for bringing the stories vividly to life. We’ve also produced ebook versions of the stories so they can be read on a tablet or laptop.

How did you choose the issues to write about?
I wanted to tackle issues that are important and universal. Take bullying for example.
According to UK research, at least two in five young people have experienced bullying in
some form in the previous year. And bullying is the most common reason for children aged
11 and under to contact Childline. ‘James and the Bullies’ is a simple story of bullying at
school that illustrates how to face up to the problem and to go about resolving it. As with so many problems, being brave enough to talk about it is more than half the answer. Also,
each story includes ten ‘Helpful Hints’ contributed by Richard Woolfson to give parents
practical ways to help deal with the issue.

Do the stories reflect your personal experience?
As a mother, I was of course concerned about the issues that the stories cover and I would have loved to have had them to hand when I was a young Mum. But I wanted to write them, based on a broader understanding of the issues and the ways to tackle them. So the situations and solutions I describe come from both Richard Woolfson’s many years’
experience working with children and their parents and the many conversations I have had
with other parents at the school gate and subsequently.

Do you have plans to write more Helping Hand stories?
I would love to. There’s no shortage of topics. For example, the growth of cyberbullying is
something I know the parents of young children I talk to are desperately worried about. It’s a problem that just did not exist when they were children so it is more difficult to grasp. I think a story that shed some light on the issue and offered advice on how to tackle it would be very well received.

What do you hope the Helping Hand stories will achieve?
I had a conversation the other day with a mum who had recently read the stories to her
young daughter. She told me that, initially, she had been a little wary of raising such
difficult topics with her innocent young child. But, equally, she knew that her little girl
would have to face such issues, probably sooner rather than later. As they describe a
fictional situation, the stories had been a relaxed way to introduce the topics and her
daughter had engaged with them. She identified with the children portrayed in them and
wanted to read them again a few days later, asking a number of questions. Mum and Dad
had felt very relieved that the topics were now ‘on the table’ and indeed the books were
now literally on the bedside table to be referred to, as and when needed. If that experience could be repeated a thousand times – or even tens of thousands of times – I would be thrilled.

There are three of the Helping Hand books: Daisy learns about strangers, Holly’s first day at school, and James and the bullies.

In Daisy learns about strangers, Daisy is in a supermarket with her mother when both parties get distracted. Daisy wanders off whilst her mother is chatting and when she turns around she can’t remember where her mother is. This is one of my worst nightmares and this book is so helpful in teaching children how to deal with it. It suggests that the child should find someone in a uniform which is exactly what Daisy does and soon she is reunited with her mother. There’s a brilliant rhyme to remember about the rules about strangers, one I’ll definitely come back to to educate my own child.

Holly’s first day at school looks at the anxieties children can face going into a new and scary environment. I wish I had had it before my son started school as it’s a really useful resource in settling nerves and putting a child at ease. Holly has a fabulous day and she realises that she can have lots of fun at school, both learning and playing, and then she can return home, looking forward to the next day. James and the Bullies looks at a situation no parent wants their child to be in. James is being picked on by a couple of lads at his school and it’s making him miserable and giving him tummy ache. This book is fantastic at helping not only children but parents too. It shows the parents working with the school to try and stop the bullying in really clever ways, not direct action as such, which could make the matter worse, but using ways of making James have more self-esteem and teaching him tactics to combat what has been happening to him.

I found these books to be engaging and useful. The language used is perfect for children to understand and each story is accompanied by bright and attractive illustrations by Amit Tayal. At the end of each book there are Ten Helpful Hints about each situation written by a child psychologist. I can’t really praise them highly enough as they marry the need for an appealing story for children with information and guidance for parents. The Duchess is widely admired for her “comeback spirit” and for overcoming formidable obstacles to succeed as a good mother who has worked hard to support her children, a survivor, businesswoman and humanitarian.

In 1993 she founded Children in Crisis (www.childrenincrisis.org.uk) and the charity has educated over 1.4 million children, trained over 18,000 teachers, built 57 schools and supports hundreds of schools on a yearly basis. Recently CIC merged with Street Child and The Duchess is Founder Patron, remaining active in its mission to provide education to forgotten children around the world. She has recently returned from visiting Street Child’s projects in Nepal and Sierra Leone, supporting the most marginalised into education and out of bonded labour.

The Duchess has published over 52 books including two autobiographies and titles dealing with health, empowerment, history, art, as well as children’s stories. Her children’s books include the series of ‘Budgie the Little Helicopter’, adapted into a highly successful animated series on US primetime Fox and her children’s book ‘Tea for Ruby’, published by Simon and Schuster had it’s debut at the top of the New York Times bestseller list.

The subject of countless media interviews herself, The Duchess has also found success as a reporter and presenter. In America, she has been a special correspondent for NBC’s Today show and has presented specials and documentaries on ABC, FOX, and CNN. In Britain, she has presented and coproduced specials for ITV, BBC, and Sky TV. She has served as guest editor on BBC Radio 4 Today programme and has regularly contributed to BBC Radio 2’s primetime lifestyle show “Steve Wright”.

She conceived the film, and produced alongside Martin Scorsese, ‘The Young Victoria’, a period romance based on the early life of Queen Victoria starring Emily Blunt and Rupert Friend and scripted by Julian Fellowes. She has written two books on the subject, ‘Travels with Queen Victoria’ and ‘Victoria and Albert: Family Life at Osborne House’. The Young Victoria was released in the US, UK, Australia, France amongst other territories and it was the closing film at the Toronto Film Festival in September 2009.

She devotes much of her time to promoting wellness and children’s causes. The ‘Helping Hand’ series of books is designed to introduce children to the issues they all confront as they grow old, through storytelling and to support their parents with advice provided by a leading child psychologist. For 10 years she was the highly successful US spokesperson for Weight Watchers International where she distinguished herself as a wellness advocate and a spokesperson for the American Heart Association. She has recently been asked to lead a campaign highlighting women and heart disease by The British Heart Foundation.

She is a passionate supporter of a number of charities including The Teenage Cancer Trust and Teen Cancer America, Julia’s House, The British Heart Foundation and The Children’s Air Ambulance. She also champions Key to Freedom, a business structure initiative set up to support the Women’s Interlink Foundation (WIF) by giving vulnerable young women a platform to sell their products. WIF works across West Bengal, India, helping these women develop skills to earn an income. She has just returned from a visit to The Bethlehem Arab Society for Rehabilitation Hospital (BASR) where, as Patron, she is spearheading a campaign to establish a cardiology department to include a heart attack centre and rehabilitation.