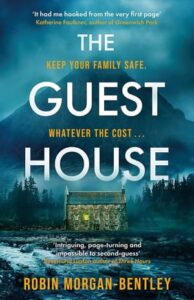 The Guest House by Robin Morgan-Bentley was published by Orion on 23rd June. My thanks to the publishers for the proof copy of the book.

KEEP YOUR FAMILY SAFE.
WHATEVER THE COST…

Jamie and Victoria are expecting their first baby.

With a few weeks to go, they head off for a final weekend break in a remote part of the North Pennines. The small and peaceful guesthouse is the ideal location to unwind together before becoming parents. Upon arrival, they are greeted by Barry and Fiona, the older couple who run the guesthouse. They cook them dinner and show them to their room before retreating to bed themselves.

The next morning, Jamie and Victoria wake to find the house deserted. Barry and Fiona are nowhere to be seen. All the doors are locked. Both their mobile phones and car keys have disappeared. Even though it’s a few weeks early, Victoria knows the contractions are starting.

The baby is coming, and there’s no way out. I was well and truly hooked on the blurb of The Guest House as soon as I read it. Jamie and Victoria go away to a guest house for a break before the birth of their first, much-longed for, baby. They arrive at Choristers’ Lodge where Fiona and Barry, the proprietors, are waiting for them. Before too long, Victoria goes into labour and they need to get to hospital but not only is there no sign of Fiona and Barry, but they have no way out of the guest house and no means of communication. Aarrgh…..see what I mean?

The Guest House is an exciting read, full of twists and turns, and I found it very readable indeed. I can’t say any more about the story but I had no idea how it was going to turn out and how (if) everything would be resolved.

The very nature of the story meant that there had to be some reason for what was happening and just at the point that I was thinking it was getting a bit far-fetched there was an OMG moment and Morgan-Bentley pulled it back and made it all make sense and seem much more plausible. It’s still pretty out there as a storyline but stranger things have happened and the excellent storytelling and tightly woven plot make this a really gripping book.

Jamie has cerebral palsy and the author writes his many frustrations very well. I liked Jamie, he was easily my favourite character, and I really felt for him having to deal with people’s pre- and misconceptions on a daily basis. The guest house itself is quite a disturbing place in the middle of nowhere, especially for Victoria, about to give birth, but equally so for Jamie, with a dawning realisation that he’s got to get them out of there.

This plot-driven book, with a strong and atmospheric setting kept me turning the pages. I thought it was a taut and absorbing read.

Robin Morgan-Bentley was born and grew up in London. After studying Modern and Medieval Languages at Cambridge University, he went on to work for Google before moving to Audible, where he has been working since 2014.

Robin lives in Buckinghamshire with his husband and son.