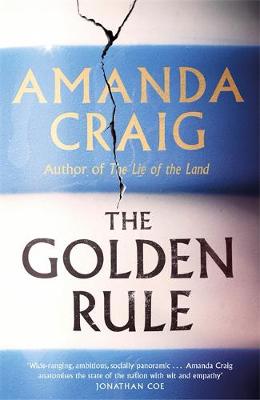 My review today is of The Golden Rule by Amanda Craig which is just brilliant. My thanks to Susan de Soissons from Little, Brown for sending me a proof copy of the book for review purposes. You can get your own copy tomorrow in hardback, ebook and audiobook.

I was intrigued to learn that there are interconnected characters in this author’s books. Each is a standalone story but there are these tiny links between them. I now want to read them all now!

When Hannah is invited into the First-Class carriage of the London to Penzance train by Jinni, she walks into a spider’s web. Now a poor young single mother, Hannah once escaped Cornwall to go to university. But once she married Jake and had his child, her dreams were crushed into bitter disillusion. Her husband has left her for Eve, rich and childless, and Hannah has been surviving by becoming a cleaner in London. Jinni is equally angry and bitter, and in the course of their journey the two women agree to murder each other’s husbands. After all, they are strangers on a train – who could possibly connect them?

But when Hannah goes to Jinni’s husband’s home the next night, she finds Stan, a huge, hairy, ugly drunk who has his own problems – not least the care of a half-ruined house and garden. He claims Jinni is a very different person to the one who has persuaded Hannah to commit a terrible crime. Who is telling the truth – and who is the real victim? From the moment I read the synopsis of The Golden Rule I knew I wanted to read it. I was intrigued by the idea that two strangers meet on a train and plot to kill each other’s husbands in what ought to be perfect, untraceable murders. This of course is very similar to the plot of Strangers on a Train and Amanda Craig did use it as part of her inspiration for this book.

However, this is not a crime novel, nor a thriller. This is a beautifully portrayed story of all of human life: the rich, the poor, the kind, the unkind, the perception of London hoi polloi and Cornish yokels. I was totally bewitched by it from start to finish.

Hannah is a single mother, poor but with a husband who could support her but instead abuses her, mentally and physically. Hannah is industrious but life is such a struggle for her. She meets Jinni on a train to Cornwall, Hannah’s home county, and Jinni is everything she is not. She’s rich, poised and stylish. But she wants to get rid of her husband and Hannah feels that she can only cope with her life if she can be free of Jake. A plot is hatched.

Nothing goes to plan though and Hannah’s return to Cornwall is revelatory for many reasons, especially when she goes to Jinni’s house and meets a man called Stan. I had in my mind that there was something of the Beauty and the Beast about the pair of them and I was pleased to see in the author’s afterword that she had also used that as her inspiration. I loved the way Craig skilfully weaved together all the strands to create such a clever and engrossing story. I also particularly liked the fact that Hannah is a big reader and books are such a big part of the story as a whole.

One other thing that particularly stood out was the depiction of Cornwall. Hannah is from a place that has not been touched by holiday makers and second home owners. Compare that to the more affluent areas and you can see why the Cornish might get a bit peeved about incomers.

I can’t do justice to The Golden Rule in just a few paragraphs. It’s a book that I could talk and talk about, there’s so much in there. It’s razor-sharp, yet so thoughtful, it’s bold, yet understated. It really has it all.

Amanda Craig is a British novelist, short-story writer and critic who has been compared to Dickens, Trollope, Balzac and Evelyn Waugh. As a literary chronicler of contemporary life she has been called a “state of the nation novelist” by Prospect magazine and the Sunday Times, and her interconnected novels often feature strong plots with murder, romance and social satire.

In her twenties she became a journalist for newspapers such as The Sunday Times, the Observer, the Daily Telegraph and the Independent, winning both the Young Journalist of the Year and the Catherine Pakenham Award. She was the children’s critic for the Independent on Sunday and The Times for over a decade. She still covers children’s books for the New Statesman, and literary fiction for the Observer, and regularly reviews for Radio 4 Saturday Review, but is mostly a full-time novelist.

Her novels include A Private Place, A Vicious Circle, In a Dark Wood, Love in Idleness, Hearts and Minds (long-listed for the Bailey’s Prize for Women’s Fiction), The Other Side of You (a novella for Galaxy Quick Reads) and The Lie Of the Land, a BBC Radio 4 Book At Bedtime. It is currently being developed for TV serialisation. Her new novel, The Golden Rule, will be published by Little,Brown in June 2020.

Each novel can be read separately, but is part of an interconnected contemporary cast of characters, in which minor protagonists become major. She is a Fellow of the Royal Society of Literature.