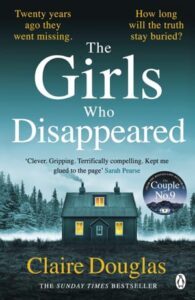 ShortBookandScribes #BookReview – The Girls Who Disappeared by Claire Douglas

The Girls Who Disappeared by Claire Douglas was published on 15th September 2022 by Michael Joseph in paperback, eBook and audiobook. My thanks to the publishers for the proof copy.

Twenty years ago: One rainy night, Olivia Rutherford is driving three friends home when a figure in the road causes her to swerve and crash. Regaining consciousness, she finds herself alone in the car – her friends have vanished.

THEY ARE NEVER SEEN AGAIN

Now: Journalist Jenna Halliday visits the close-knit community of Stafferbury to persuade Olivia to talk and solve the mystery of the girls’ disappearance. But Olivia won’t speak.

Is Olivia hiding something?
Why are the people of Stafferbury so frightened?
How many secrets can one small town hide? How can three young women have disappeared at the same time, from the same car crash on the spooky-sounding Devil’s Corridor? The driver, Olivia, survived the accident but her three friends were never heard of again. Now, twenty years on, Jenna is in the small village of Stafferbury to interview people for a podcast about what happened. Was it foul play or some kind of paranormal event on a road that seems to be shrouded in mystery?

I was kept guessing throughout the whole novel and it was only towards the end that it all slotted into place. The story is told from Jenna’s and Olivia’s points of view, with another strand, which seemed unconnected, also forming part of the overall tale. I thought the plot was all pulled together brilliantly by Claire Douglas and in the second half particularly I found myself racing through the pages as the tension rose.

The three disappearing women felt like an inspired storyline to me. One missing woman could be fairly easily explained but three together seemed truly bizarre and had caused much speculation over the years, hence Jenna coming in to record her podcast. I really enjoyed this engaging psychological thriller. I think there would be scope for a follow-up, with Jenna perhaps investigating another cold case for her podcast and I’d also love to see how things might develop for her with one of the other characters. The Girls Who Disappeared really kept me engrossed.

Claire Douglas has worked as a journalist for fifteen years, writing features for women’s magazines and national newspapers, but she’s dreamed of being a novelist since the age of seven. She finally got her wish after winning the Marie Claire Debut Novel Award, with her first novel, The Sisters, which was followed by Local Girl Missing, Last Seen Alive, Do Not Disturb, Then She Vanishes and Just Like the Other Girls. Her latest novel, The Couple at No 9, was a Sunday Times top 3 bestseller and a Kindle number 1. She lives in Bath with her husband and two children.