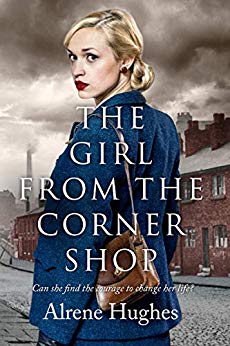 I’m delighted to be reviewing The Girl From the Corner Shop by Alrene Hughes today. It’s a fabulous read. My thanks to Vicky Joss from Aria/Head of Zeus for the place on the tour and for providing a review copy of the book.

WW2 Manchester: Newlyweds Helen and Jim Harrison have big plans – to leave the family shop where Helen works and set up home together. But when Jim is tragically killed in an air raid, Helen is heartbroken, her life in ruins.

Battling grief and despair, Helen resolves to escape her domineering mother and rebuild her shattered world. Wartime Manchester is a dangerous place, beseiged by crime and poverty. So when Helen joins the Women’s Auxiliary Police Corps, working with evacuees, the destitute and the vulnerable, she finds a renewed sense of purpose. She’s come a long way from her place behind the counter in the corner shop.

But there’s still something missing in her heart. Is Helen able to accept love and happiness and find the courage to change her life?

I loved The Girl at the Corner Shop. It’s a fabulous wartime saga which completely drew me in to the story. And what a story!

Helen Harrison and her husband, Jim, are about to escape her mother’s clutches, and the corner shop that she owns, to move into their first house overlooking the park. Jim is a fireman and in the midst of World War Two that’s a very dangerous job to be in. During a massive air raid on the centre of Manchester Jim is killed and Helen is lost without him. This all happens very early on and Helen now needs to find a way to live her life without Jim and preferably without her mother making her life a misery. She decides to move into the house anyway and starts to look for other work.

Here’s where the story really gets interesting. First of all, Helen finds temporary work at a fashion business but it’s when she joins the Women’s Auxiliary Police Corps that it gets particularly exciting. I had no idea there was such an organisation and that women were so involved in policing during the war. To be fair, most of them probably ending up filing and clerking but Helen, as befits our feisty heroine, finds herself really taking to the job and getting out into the thick of the action.

I thought Helen was a wonderful character. She’s practically perfect in every way and very likeable with it. I felt so sorry for her as her chance of happiness was yanked from her but I hoped she would find it again during the course of the novel and let’s just say I wasn’t disappointed by the ending.

This is my first book by Alrene Hughes and I’d most definitely read another. She has a very warm writing style, one that kept me interested in Helen’s story and rooting for her all the way through. I liked the fact that the storylines are quite gritty at times and yet there’s still a soft edge to the story with some genuinely nice characters. A very enjoyable read indeed. Alrene Hughes grew up in Belfast and has lived in Manchester for most of her adult life. She worked for British Telecom and the BBC before training as an English teacher. After teaching for twenty years, she retired and now writes full-time.